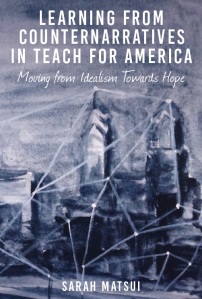 The “achievement gap” is often presented as an isolated phenomenon, and it has become a misleading euphemism for the workings and product of historic oppression, structural injustice, and institutional racism.
Sarah Matsui, Learning From Counternarratives in Teach for America: Moving from Idealism Towards Hope (2015)

True generosity consists precisely in fighting to destroy the causes that nourish false charity.
Paolo Freire, The Pedagogy of the Oppressed (1972)

When Sarah Matsui graduated from Penn, she was accepted to the competitive Teach For America (TFA) program, a two-year teaching odyssey in urban and rural schools all over North America. More than $300 million strong and heralding education reform through meritocratic slogans like “Work Hard, Get Smart,“ Data-Driven” and “Closing the Achievement Gap,” for the past 25 years TFA has successfully recruited the highest caliber graduates from top U.S. schools to heroically stride into the nation’s most under-resourced classrooms.

Matsui’s just released Learning From Counternarratives in Teach for America: Moving from Idealism Towards Hope (Peter Lang) is a project started mid-way through her TFA assignment in Philadelphia. She utilizes personal experience, scientific surveys and interviews and loads of educational research to call into question many of TFA’s ways and means. I was eager to read this book not only because I respect the depth of writing (like this) that Matsui has produced on RadicalDiscipleship.net, but also curious to see if it resonated with my own experience in a public high school classroom.

Learning From Counternarratives matched many of my own experiences and met my high expectations: it is an eye-opening, accessible and constructive work that deserves to be read, not only by those in the field of education, but by all of us envisioning and organizing a more equitable and just world than what late capitalism has been offering. As Arundhati Roy has presciently educated us on the dark side of many non-profits, NGOs and foundations, Matsui has rolled up her sleeves to do the hard, detailed work to expose the fraudulent claims of one of these so-called “forces for good.”

Throughout, Matsui effectively pursues what Cornel West describes as a “truth that allows suffering to speak.” She opens up space for TFA corps members (CMs) to tell their own stories that involve trauma, guilt, shame, ramped up addictive copings and heightened skepticism of TFA scripting (often referred to as drinking the TFA kool-aid). Matsui effectively utilizes these counternarratives to unmask the grand metanarrative that TFA methodically cultivates (called “Orwellian” by multiple CMs in her study).

Matsui works in the tradition of social scientists like Paolo Freire and Howard Zinn who go under the radar to expose the foibles and fallacies of the official versions and conventional wisdom of elites. She interviews those in the trenches:

These localized ‘little stories’ have the power to interrupt the grandiosity of the metanarrative and advocate for a more truthful representation of reality.

An expose of TFA is vital at this time, a quarter century into its project, one that U.S. Secretary of Education Arne Duncan has described as “a proven strategy ready to go to scale.” Matsui is not naïve about what is at stake here. The TFA model has gone mainstream. Foundations and corporations have an agenda to promote heroic narratives, charter schools and privatization. There’s profit to be made by telling the story of personal idealism instead of public investment. TFA’s script steamrolls statistics like these:

Theological takeaways abound. It prods radical disciples to examine the mysterious ways that sin and evil manifest in systems, structures and cultures. TFA is a prime example of the idolatrous nature of “principalities and powers,” whitewashing constructive criticism with broad brushstrokes about “being a force for good” in the world.

Matsui’s focus on the power of the TFA script and the need to seek out counternarratives mirrors the Bible’s own diversity of perspectives. For instance, who killed Goliath: the young man who would one day become King David (I Samuel 17:4) or was it Elhanan son of Jaare-Oregim the Bethlehemite (2 Samuel 21:19)? Matsui’s voice represents all those prophetic Scriptural proclamations that embrace the perspective “from below.” These train us towards a hermeneutic of suspicion that listens intently to elite claims and responds, “For real?”

In my own context, we find ourselves daily presented with the choice, animated by Dr. Jim Perkinson, between development or community. Do we throw in with the mainstream narrative that the comeback of Detroit is reliant upon the downtown & midtown investment of wealthy white saviors like Dan Gilbert of Quicken Loans or Mike Ilitch of Little Caesars? Or do we throw in with the neighborhoods, 40% of residents living below the poverty level, pounded by decades of white flight, globalization, automation in the workforce and institutionalized racism, currently victimized by water shutoffs, foreclosures and joblessness? Massive implications abound over which story we choose to tell. And live.

Idealism is insufficient to dismantle structural inequity. TFA’s hero narrative calls for CMs to overcome the obstacles of structural oppression, institutional racism, and historic inequity through their individual hard work and caring, and in doing so, it minimizes the need for systemic change.

I’m particularly impressed by the spirit and tone that Matsui brings to this delicate work. Those searching for an author harboring bitterness or grinding axes will not find one here. Learning From Counternarratives is truly a good will offering, a prophetic work birthed in genuine concern. Matsui has a complex relationship with TFA, a deep gratitude for her own opportunity and experience inside a Philadelphia classroom, but ultimately one that has prodded her to speak out in a scholarly fashion that is fair, focused and professional. She refuses the temptation to cut-off. She’s at the dinner table, asking the family to their ways.

Learning From Counternarratives is a wake-up for a world caught in a corporate slumber. Efforts that focus on heroic idealism and sideline analysis around identity, power and policy hinder education, economic, racial, political and environmental “reform.” With this project, Matsui emerges as a 21st century Penny Lernoux, reporting on injustice, courageously and experientially, because her conscience compels her to. Her work calls us to apply these lessons wherever we find them. And, sure enough, they are everywhere, beckoning us to take the next step. We read, take heed and proceed into the struggle.