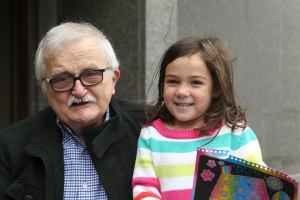 By Kate Foran. The following is the fourth post in a series by Kate Foran  exploring an alternative kindergarten education for her daughter Sylvie.

Part of my inspiration for pursuing an alternative education for my five-year-old daughter Sylvie has been the work of Communitas, a Connecticut-based organization focused on building inclusive community, particularly for people with disabilities.   Since the 1980s Communitas has pioneered the model of “circles of support” which focus on the dreams and capacities of people with disabilities to enhance their lives and their communities. This model of organizing came out of a time when people with disabilities were often shut away in institutions, and were seen as a collection of needs and problems rather than individuals with gifts and desires for their own lives. The idea was deceptively simple: the focus person gathers together people who will help identify and enact a vision for a full and satisfying life. Through this model, Communitas has helped people start housing co-ops, find employment, publish books, and make art. With circles of support people have been able to do everything from coordinate caregivers to meet their basic needs so that they might live more independently, to travel the country on speaking tours.

This model has influenced our education journey in multiple ways, including experimenting with creating a circle of support for Sylvie’s education (with the understanding that we could all probably use such a circle!), and in being part of someone else’s circle.

Sylvie’s education circle functions as our own sort of advisory board that meets in September, January, and June to provide support and accountability for our vision for Sylvie’s education. This circle is separate from the community of other homeschoolers with whom we meet regularly; it includes a dozen or so people I consider to be my mentors, and who I hope will be mentors for Sylvie. Gathering this group together helps us punctuate the year with opportunities for reflection, and gives Sylvie a chance to report in on what she’s learning. In between meeting times circle members look for ways to connect Sylvie’s journey with their own work and lives. Some write letters and ask her to write back with fun prompts; some arrange trips to museums and festivals (we got an insider’s visit to Bread and Puppet this past summer when two circle members were working there, for example); some come visit and read books and play with her. Sylvie already understands that this group of people is available to answer questions and help her reflect. As we await the birth of Sylvie’s baby sister, for example, Sylvie has asked her circle to share stories with her of “what it’s like to have a sibling and to be a sibling.” Our hope is that the benefits go both ways—one circle member said that gathering together around this project reminds her that she has dreams for her own life, too.

Sylvie’s education circle is an experiment, and it will require tweaking as we go on; at this moment I am feeling like gathering together and talking about what Sylvie has been up too is a little too much focus on one kid. So for the next gathering we are all going to work on art projects together, and we are going to brainstorm ideas to make the process less “Sylvie-centric.”

One way we have found to connect to broader concerns is to be a part of someone else’s circle. Through my connection to Communitas, I became familiar with the story of Richard Lapointe, a man with Dandy Walker Syndrome who was wrongfully imprisoned for 26 years for a murder he was pressured by authorities to confess to committing. The relationship Communitas has had with Richard epitomizes the “long walk” that is their work. For almost 30 years Communitas has been part of the Friends of Richard Lapointe, a circle of people organized around supporting Richard through his imprisonment, and as of April of this past year, through his life as a free man. My family and I are newcomers to Richard’s circle, but we were welcomed onto the journey when we provided temporary housing for Richard upon his release.

Some of our friends and family had concerns about the wisdom of taking in an “ex-con” to our home with Sylvie. But in our discernment Sylvie was one of the main reasons we decided to offer Richard hospitality. My husband Steve had once read a study which tried to understand what factors allowed some Germans to resist Nazism (and I have often wondered what I would have done in that situation). The things resisters had in common were a background in public speaking or theater, and a household practice of hospitality. I have many goals as a parent, but one hope I would have is to raise someone capable of such courage. In order to do that, I have to practice a measure of courage myself. Therefore it seemed a core piece of our daughter’s formation to open our home to a stranger in need.

Indeed, having Richard around allowed for many “teachable moments.” Patience, a sense of humor, and the ability to repeat oneself many times were chief among the skills we all honed while living with Richard. We got used to Richard losing his wallet, his dentures, phone numbers, his hat—and a constant refrain was “check your pants” (the lost item was usually in a pocket). At one point I explained to Sylvie that hosting Richard was part of her education, and the next day when Richard’s physical therapist came to work with him Sylvie pulled up a chair in front of them and studiously watched.

Our proximity to Richard’s story also brought up some large and difficult questions. Sylvie was aware that Richard was wrongfully convicted, and she had also been with me to a few “Black Lives Matter” rallies. One day she asked me, “Do police get children?” The question felt so heavy. I wanted to reassure her that she was safe and that police only work for the good of the community, but she already knew that wasn’t true. So I said mostly police try to keep kids safe, but that the way it worked wasn’t fair—that some people were targeted more than others. And she replied, “But we have light skin, so we’re safe, right?” And my heart dropped into my stomach at what her five years of life had already taught her. What could I say, except that her observation was true, and it was one of the biggest problems we have? “Yes,” I said, “and that is NOT okay.”  It is not okay that some people are scapegoated because of their race (or in Richard’s case, disability), and some people are shielded.

Richard has since moved on to a setting which provides more structure and care than we could give him in our home. Communitas and the Friends continue to walk with Richard, and help make his life out of prison as fulfilling as possible (though what he really wants is what was stolen from him—his old life and his family back). Whenever Sylvie and I visit Richard, he always has some goodie or stuffed animal stashed away for her, and he greets her with an embrace that nearly topples both of them over. Those moments of joy and connection reinforce my sense that Sylvie does not need to be shut away in an age-segregated classroom for the majority of the day right now. She needs to be connected to the wide range of our community, just like Richard does. Just like I do.

An Offering from Dreaming Stone Arts and Ecology Center