White people: no one is asking you to apologize for your ancestors. We are asking you to dismantle the systems they built and that you maintain. We have no use for your guilt. What we want from you is action.
Sylvia McAdam, co-founder of Idle No More

Snow came early this year to the Canadian prairies, but there were some logs of hope burning in the fireplace of the soul last weekend at St. Andrew’s College in Saskatoon as 100 First Nations and white settler leaders convened for the Fall 2016 Bartimaeus Institute entitled The Truth & Reconciliation Commission Calls Churches to Action: Building Capacity for Restorative Solidarity.  The seven residential school survivors in attendance served as elders, guiding participants with both historical memory and spiritual anticipation.

From 2008 to 2015, the Canadian Truth and Reconciliation Commission (TRC) traveled to different parts of the country to hear the testimony of approximately six thousand Aboriginal people who were taken away from their families and placed in residential schools as children. Based on their findings, and the recently released United Nations Declaration on the Rights of Indigenous Peoples, the Commission issued ninety-four calls to action, nine of them specifically geared toward churches and faith communities. A key theme that emerged rapidly at this Institute was the painfully obnoxious gap between word and deed in white settler churches–eager to make pronouncements, but paralyzed in the process of producing just policies (various forms of political ambivalence brought on by comfort, convenience, complexities and concessions to “lesser of two evils” thinking–well-chronicled over the years by Institute co-facilitator Ched Myers). The Canadian government apologized, but very little has been done to repair the deep wounds.

The obvious consensus at this Bartimaeus Institute was that authentic reconciliation requires reparations.  Tragically, First Nations families continue to be robbed by what restorative justice practitioner (and co-facilitator) Elaine Enns named as “settler strategies of cultural genocide” (including poverty, ongoing land disputes, police brutality, missing/murdered indigenous women). To even begin this process requires that we name that the past is actually not in the past.  Most white settler churches, unfortunately, can’t get to this starting block of the long distance race that Enns calls “restorative solidarity.” 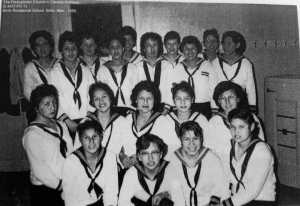 A vastly unacknowledged and under-appreciated indigenous Christian spirituality was on display throughout the weekend. Adrian Jacobs, the Keeper of the Circle at the Sandy-Saulteaux Spiritual Centre explained, “Our people have wrestled with the Christ story and then worked it out.” This is a manifestation of Spirit deeply connected to the land, the wind and Every Living Thing around us.  Lorna Standingready, the former Leading Elder of the All Native Circle Conference of The United Church of Canada and BCM Institute elder (photo right: second from the right in the front row, at the Birtle Residential School, run by the Presbyterian Church of Canada), spoke of her reverent connection to the earth, how she “starts every morning by going outside and facing East to pray for all my relations,” what the Lakota call Mitákuye Oyás’iŋ–prayers and works of justice and mercy woven together harmoniously into a profound interconnectedness. Institute elder A.J. Felix prodded, “It’s not good enough to just stand back there and pray. You’ve got to get out there and make your prayer come true.”

Highly skeptical of bloated institutions and the Church’s disastrous marriage to power, this is a brand of Christian faith deeply aligned with the same condition of exile that produced the biblical texts.  The National Indigenous Anglican Bishop of Canada Mark McDonald queried, “Will the church have the moral authority to be what it was meant to be?” He contrasted the investment in institutional survival with a rare commitment to the challenging, thankless, unpopular work of reconciliation and reparations. According to McDonald, the TRC is “a framework for conversion.” Jennifer Henry of KAIROS Canada, confessing “evil structures that have become embedded in our hearts and minds,” connected the TRC to the renewed covenant of the prophet Jeremiah: “I will put the law in their minds and I will write it on their hearts.” Sara Stratton, the United Church of Canada’s Animator for Reconciliation and Indigenous Justice, designated the TRC’s call to action as “the last opportunity” for white settler Canada, a call to embrace a lifestyle “rejecting documents of superiority,” rooted in our racism and privilege.  The well-worn vinyl was appropriately skipping this weekend, stuck on verses like “without justice there is no reconciliation” (repeated a half dozen times in indigenous activist Leah Gazan‘s talk) and “we need action, not just words.” Or as Jacobs testified, “We don’t have a problem with forgiveness. We do have a problem with believing you.”

As I took in these brilliant plenary sessions and workshops, I was struck by how these indigenous leaders navigated the tension between ruthlessly embracing the fierce urgency of now while patiently trusting that, indeed, the long arc of the moral universe is somehow bending towards justice. It mirrored the vibrant spiritual energy of grief and gratitude that I experienced time and time again these past two years with black women leading the struggle for water affordability in Detroit.  Leaders of color, so often overlooked, are our pre-eminent models for a radical discipleship utterly allergic to despair, denial and indifference.

Meanwhile, guilt and fragility tend to paralyze well-meaning white leaders (like me) into a form of “prefigurative politics,” a purified insularity that combines “being in the know” box-checking and call-outs with the satisfaction of enjoying warm relations with people of color and queer folk. It can be much more about securing identity within the cause than the actual cause itself.  All too often, it can percolate a self-righteousness (intensified in the age of Trump!) that can rob us of the creative energies desperately needed for goal-oriented strategizing and broad-based coalition outreach.

For those of us with skin and class privilege, doing our part means that we commit to more diversified spiritual portfolios that demand robust inner work so that we can recover from our malformation at the hands of imperialist white supremacist capitalist patriarchy.  As Eileen Klaassen Hamm of Mennonite Central Committee Saskatchewan lamented, “Repudiating the doctrine of discovery on paper was easy because it is horrific, but to extricate the superiority from my soul—that’s the task, and that’s not simple.” This much-needed humility will require beloved communities of nurture and support, loads of grace and camaraderie, commitment to spiritual disciplines and active recovery from addiction, as we learn what it means to nail our power and privilege to the cross, trusting that it will rise to newness of life (in ourselves and in unjust structures).  This blend of personal inventory and prophetic imagination (fermenting in community) is “the small gate and narrow road that leads to life” for radical Christian disciples negotiating a North American context that is far from post-colonial.

If the UN Declaration on the Rights of Indigenous Peoples (and, especially in the United States context, the UN International Decade for People of African Descent) really is our last chance at salvation, then the Great Commission for white settler Christians is to bring this Word back to our rural, working class, suburban and gentrified enclaves. For those of us baptized into the intersection of the seminary, sanctuary, street and soil, a re-claimed evangelism ultimately means channeling time, energy and resources towards building a broad-based movement for authentic reconciliation.  Only this kind of organizing will actually transform what Michelle Alexander calls the “tightly networked system of laws, policies, customs, and institutions” that continues the colonial assault on black and brown bodies on the North American continent (and all over the globe).

All of this is heavy lifting and we are all called to some form of it.  However, this work ought not be glorified.  At the very least, it just ought to be.  This Bartimaeus Institute, once again, provided a little space for the mustard seed of awakening to sprout into a Movement of action. Now for the hard work of planting and tilling–sweating, crying, confessing, organizing, translating, agonizing, brainstorming, boycotting and defying…until our prayers become reality.

3 thoughts on “A Call to Action”