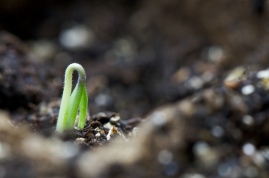 Night and day, woman and man, soil and sky, humanity and God: all these primal pairs are present in this week’s proclamation of the Uprising of Jesus. Each pair echoes an element of the first chapters of Genesis, the foundational narrative of the “religion of creation” upon which John’s gospel is grounded. These connections help us to hear that the hope of Easter is not in an invisible part of one’s self (“the soul”) leaving earth for somewhere else, but in the power of the Creator God to continue to bring forth life from the earth, despite the murderous ways of empire.

From “the beginning,” the religion of empire has expressed disdain for the sacredness of earth and sea. In Jesus’ time, the Roman Empire embodied such disdain in, for example, the brutal logging and mining operations that raped mountains and forests to provide material for imperial military and commercial projects. Perhaps the most famous critique of this systemic destruction comes from the pen of a leading Roman historian, Tacitus, who puts it in the mouth of a defeated chief, Calgacus:

Robbers of the world, having by their universal plunder exhausted the land, they rifle the deep. If the enemy be rich, they are rapacious; if he be poor, they lust for dominion; neither the east nor the west has been able to satisfy them. …. To robbery, slaughter, plunder, they give the lying name of empire; they make a desert and call it peace. (Tacitus, Agricola, 38)

Some of those logged trees became, of course, crosses, with which to execute would-be subversives and terrorize onlookers and potential resisters. As the late Daniel Berrigan liked to say, “If you are going to follow Jesus, you better look good on wood!” In the synoptic gospels, Easter can be understood as God’s powerful reversal of the cruciform judgment of empire against the Way of Jesus. But in John’s gospel, Jesus’ death is not a “defeat.” We hear before he engages the via crucis that “I have conquered the world!” (16.33). Rather, the Johannine Jesus announces in advance that the entire Passion story is a matter of seed planting: “Amen, amen I tell you” unless a grain of wheat falls into the earth and dies, it abides alone; but if it dies, it bears much fruit” (12.24).

The Johannine Jesus has been anticipating the season of earthy fruit-bearing from the beginning. The first section of the Gospel narrates a week of Jesus’ ministry that leads into the abundant overflow of the wedding wine at Cana, a symbol of the messianic inbreaking, as heard in a text like Joel 3.18: “In that day the mountains shall drip sweet wine, the hills shall flow with milk and all the stream beds of Judah shall flow with water…”

The other key text that underlies our Uprising story this week is Daniel 12.2, the promise that “…at that time your people shall be delivered…Many of those who sleep in the dust of the earth shall awake, some to eternal life and some to reproach and eternal shame.” Fulfilling this promise is central to Jesus’ own ministry, as we hear:

With these foundations in mind, let’s follow Mary Magdalene, Peter and the Beloved Disciple as they begin to discover the truth about their Lord.

The narrator sets the scene by emphasizing the rhythm of night and day that echoes Genesis 1: “Early on the first day of the week, while it was still dark…” One practically expects to hear the Voice of YHWH Elohim proclaim, “Let there be light!” But we also hear from the Johannine Prologue: “the Light shines in the darkness, and the darkness has not overcome it” (1.5). Despite the darkness, Mary Magdalene can see that the stone door has been rolled away from the cave-tomb in which she expects to find the body of her Lord. This leads her to seek out Simon Peter and the Beloved Disciple to help her grapple with the mystery of the apparently empty tomb. While their racing reach into the dark tomb reveals to them the truth of Mary’s witness, they turn around and head home, “for as yet they did not understand the scripture: that he must rise from the dead” (20.9).

The Roman Catholic lectionary stops here, keeping the focus on the male disciples and leaving readers with an apparent paradox: if they “saw and believed,” why do we then hear that they “did not understand the scripture”? Fortunately, the Gospel continues into its second half, focusing on Mary’s encounter with Jesus. As she remains weeping outside the tomb, she finds that it is not actually empty at all, but is occupied by “two angels in white, sitting where the body of Jesus had been lying” (20.12). After crying out to the angels about the mystery of where Jesus’ body has gone, she turns and sees Jesus, but famously mistakes him for “the gardener” (Gk, kipouros, only here in the Bible). This invokes for our ears yet another Genesis echo, of course: the primal place which the Creator provided as the home of humanity, the Garden of Eden. Curiously, however, John’s Greek word for “garden” at John 18.1 is kipos, while the Septuagint for Genesis 2.10 uses the Persian loanword, paradeisos, “paradise.” Kipos connects our story not with Genesis, but with the Hebrew Bible’s most earthy and sexual story, the Song of Songs, as we hear: “’Let my beloved come to his garden, and eat its choicest fruits’. ‘I come to my garden [LLX, kepos], my sister, my bride…Eat, friends, drink, and be drunk with love.” (Song 4.16-5.1).

The Song also includes the image of the female lover searching for her apparently lost beloved: “I sought him, but did not find him…” (Song 5.6). We can hear Mary Magdalene as one lover and Jesus as the other at this level of our story. But as Ellen Davis has beautifully laid out, the Song of Songs is not only a story of sexual longing between a man and a woman, although it is that, despite the dogged efforts of early church writers to repress the obvious meaning in favor of a more “spiritual” interpretation. In the broadest frame, the Song poetically expresses a threefold, interdependent restoration of harmony and abundance:

Our Gospel passage participates in this narrative of healing and restoration, precisely by putting the emphasis on the fruitful harmony between earth and sky, seed and soil, Jesus and God, disciples and our Lord. It is in and through Jesus’ descent into the earth that the Uprising can spring forth. The Risen Jesus is not a spiritualized specter, but is a new creation. The Risen One can be touched; he eats and breathes and lives in continuity—indeed, in communion—with the embodied lives of his beloved friends.

This is our hope as disciples. It is not what Marx and others rightly decried as a promised escape from earth into a spiritual heaven. Rather, our hope is in the undaunted power of the Creator to continue to bring forth life from earth, despite all the efforts of empire to crush it. It is the expectation of the experience of embodied Love bursting forth from the ground, imbued and animated by God’s own Spirit, just as in the first creation story (Gen 2.7) and in the promise of Daniel 12. It is the palpable, tangible, powerful Presence of the Word made flesh, not just once-upon-a-time in Jesus, but each day and in all places, where an earthed trust in the Creator’s Word finds a home in human bodies and communities of bodies. It is this power of God, revealed and available, that enables us to persist in the face of imperial propaganda and death threats.

May the unparalleled power of Uprising fill you and yours, as we celebrate a season of Life bursting the bonds of death and spreading abundantly across God’s fertile earth.

Sue Ferguson Johnson and Wes Howard-Brook collaborate in the ministry, Abide in Me, from their home in the Issaquah Creek Watershed in Western Washington. Sue is a spiritual director of individuals and couples and Wes teaches theology at Seattle University. Together, they seek to integrate the inner and outer journeys with the Creator.