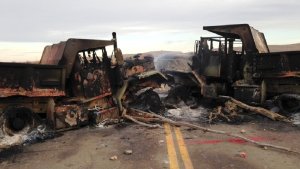 If you haven’t already, meet Jessica Reznicek and Ruby Montoya, Catholic Workers from Des Moines, Iowa, who secretly carried out multiple acts of sabotage and arson in recent months in order to stop construction of the controversial $3.8 billion Dakota Access pipeline. These are excerpts from a longer interview with Amy Goodman on DemocracyNow.Org:

Ruby Montoya on what they did:

We acted after having exhausted all other avenues of political process and resistance to this petroleum pipeline that, to my knowledge, is the largest in the United States as far as the capacity that it is able to carry the oil.

Jessica Reznicek on why this action is not violent:

I think that the oil being taken out of the ground and the machinery that does it and the infrastructure which supports it, that this is violent. This is—these tools and these mechanisms that industry and corporate—corporate power and government power have all colluded together to create, this is destructive, this is violent, and it needs to be stopped. And we never at all threatened human life. We never at all—and, actually, we’re acting in an effort to save human life, to save our planet, to save our resources. And nothing at any point was ever done by Ruby nor I in anything outside of peaceful, deliberate and steady loving hands.

We have a rich tradition, started by Dorothy Day in the 1930s. And we have a rich tradition both in assisting underprivileged people in our communities, via soup kitchens, hospitality, shelters for homeless people who we live with in our communities, and we also have—on the flipside of that, we also recognize the resistance that is needed to help bring underprivileged people back up to the same level as the people who are taking the money from them. And so, in essence, Ruby and I focus on the resistance aspect here in the Des Moines Catholic Worker. And we have followed suit, and I believe that we are inspired by Mr. Phil Berrigan—the house that we live in is named after. And we do understand the need to dismantle infrastructure when it poses a threat to human life and liberty.

Ruby on how she got involved in this prophetic vocation:

I actually met Jessica on the Mississippi River. Prior to that, I was a preschool teacher in Boulder, Colorado. And I found out about the Dakota Access pipeline. I read about what they were intending to do, to put these dirty petroleum pipes underneath our major waterways here in the United States. And I was aghast by their intentions. So I quit my job, and I went to Standing Rock. And I was greatly comforted by the amount of people that were there, the amount of helping hands ready to do resistance work and community work. And I was following the Dakota Access pipeline so closely that I found out about Jessica Reznicek starting an encampment on the Mississippi River bore site. And I went there because I knew that there were not a lot of people there.