No churchbells here
this morning
but a doorbell,
yes,
and it sure is
ringing

No wafers,
but hands outstretched
and the five-buck
refrain:
“yeah we got it”
“oh god bless”

And don’t you
smell that Holy
smoke drifting
down the stairs?
END_OF_DOCUMENT_TOKEN_TO_BE_REPLACED 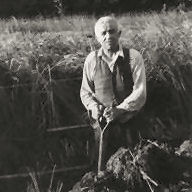 Another one of Peter Maurin’s legendary “easy essays.”

1. When John Calvin
legalized money-lending at interest,
he made the bank account
the standard of values.

2. When the bank account
became the standard of values,
people ceased to produce for use
and began to produce for profits. END_OF_DOCUMENT_TOKEN_TO_BE_REPLACED 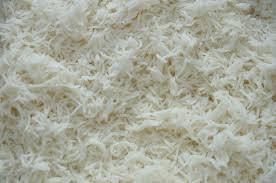 Your appetite has a reputation of its own. Dinner hosts glow as you ask for seconds and thirds and they marvel that a person of your moderate size can put so much away. You must have several hollow limbs, they wonder, and you offer your compliments to the chef, tasting everything again. Before you go to a party you “pre-eat,” you say, so as not to embarrass yourself. You remember your life as a series of meals—the loaf of bread Mrs. DiMartino baked you for your seventh birthday, the pasta your grandmother made and draped over chairs and towel racks in the kitchen, the collards and fried chicken you ate with gusto, to the delight of the local cook in Memphis. You never encountered a meal you didn’t like. END_OF_DOCUMENT_TOKEN_TO_BE_REPLACED

If you haven’t already, meet Jessica Reznicek and Ruby Montoya, Catholic Workers from Des Moines, Iowa, who secretly carried out multiple acts of sabotage and arson in recent months in order to stop construction of the controversial $3.8 billion Dakota Access pipeline. These are excerpts from a longer interview with Amy Goodman on DemocracyNow.Org:

Ruby Montoya on what they did:

We acted after having exhausted all other avenues of political process and resistance to this petroleum pipeline that, to my knowledge, is the largest in the United States as far as the capacity that it is able to carry the oil.

END_OF_DOCUMENT_TOKEN_TO_BE_REPLACED

By Craig Larson, co-director (with his spouse, Carol) of a Catholic Worker farm, growing potatoes and haskap berries in Swan River, Manitoba.  They give their food freely away to food banks.  Originally posted on their wonderful site: The Parkland Worker Blog: An Unauthorized Diary of Care and Compassion (thanks to RD.net contributor Joshua Weresch for connecting us to this great work).

In 1957 Daniel Berrigan, SJ, was appointed professor of New Testament studies at LeMoyne College in Syracuse, NY.  While there he organized students to look into the lack of adequate low-income housing.  Organizing a Catholic Worker house of hospitality earned him an irate phone call from the bishop insisting that he stop this endeavour.  It seemed that many of the slumlords were Catholic and held that at the very least a CW house would undercut their incomes.  Even though a bishop had no power over an academic position, Berrigan’s actions ultimately resulted in his being removed from priestly and academic assignment, relocated to Baltimore, and then reassigned to numerous locations in Central and South America.  He understood it as banishment…exile…punishment issued by his superiors, but used every opportunity there to immerse himself in the lives of the poor, the disenfranchised, and the people living in the barrios.  You may read about the particulars of this in his autobiography, To Dwell In Peace. END_OF_DOCUMENT_TOKEN_TO_BE_REPLACED 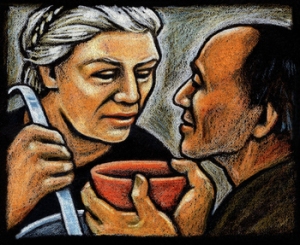 Reprinted from The Catholic Worker newspaper, May 2016

The aim of the Catholic Worker movement is to live in accordance with the justice and charity of Jesus Christ. Our sources are the Hebrew and Greek Scriptures as handed down in the teachings of the Roman Catholic Church, with our inspiration coming from the lives of the saints, “men and women outstanding in holiness, living witnesses to Your unchanging love.” (Preface to the Eucharistic Prayer for holy men and women) END_OF_DOCUMENT_TOKEN_TO_BE_REPLACED

From nomadic artist Dimitri Kadiev, at the Catholic Worker in Rochester, NY: 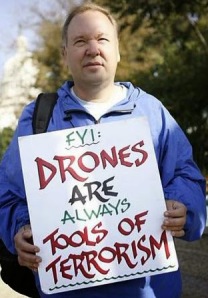 The Dorothy Day Catholic Worker House in Washington D.C. has maintained a weekly peace vigil at the Pentagon since 1987. This is an excerpt from a piece that Art Laffin wrote for the The National Catholic Reporter in October:

This morning I was alone there and had an opportunity to be present to hundreds of civilian and military Pentagon workers, a number of whom acknowledged my “Good Morning” greeting.

During the vigil I prayed in repentance for my own complicity in our culture of violence and for a conversion of my own heart to the Gospel. I prayed, too, that all who work at the Pentagon as well as in the larger military-industrial complex, and who are responsible for directing, planning, and implementing overt and covert military interventions throughout the world have a conversion of heart away from war, weapons, killing and torture, and towards God’s way of nonviolence, justice and peace.

I also prayed for and remembered the victims of U.S. warmaking and poverty, past and present. And I prayed for all those seeking peace and reconciliation in war zones, all peace prisoners and all who are held captive, including those detained in Guantanamo, some of whom are still on a hunger strike.

I finally prayed that the Pentagon would one day be converted and that each of the five sides of the building be transformed into: a center for nonviolent conflict resolution training; a center for developing and providing alternative and renewable energy sources; a medical treatment center; a daycare center; and a bakery.