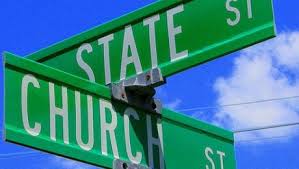 (The text below has been expanded from the original sermon.)

Not so long ago a sermon on religious liberty would likely provoke yawns. The widespread and diverse claims of “religious freedom” are so common and unquestioned in our culture, they mostly go without notice. (Which, if anything, may be testimony to how tamed our assumptions have become.)

In recent years, however, a new crop of claims of religious freedom has arisen to give credence to some very old forms of discrimination.[1] Some claims to religious liberty disguise social mischief. How do we distinguish the two?

On a personal level, one of the toughest church-state conflicts I recall happened when we lived in Atlanta. Our congregation, where Nancy was associate pastor, had been given a piece of property behind our church house. Members of the church formed a mission group to build a group home for adults living with developmental disabilities. A few young upwardly mobile professionals in the neighborhood were fearful that such a facility would erode property values, so they began organizing against the zoning exemption needed to build the group home. And they won.

So . . . was this a religious freedom issue, or just a real estate dispute?

In recent years the issue of religious liberty has become a hot button in a number of ways. Abortion, of course; but even more dramatically, over whether a company’s health insurance should be required to cover contraceptives. Still in the headlines in numerous places is the controversy over whether county court house clerks can refuse on religious grounds to issue marriage licenses to same-sex couples.

Barely two months ago President Trump signed his “Presidential Executive Order Promoting Free Speech and Religious Liberty.” It takes aim at the 1954 Johnson Amendment to the US tax code, specifically prohibiting charitable organizations, including faith communities, from formally supporting or opposing candidates for political office. Truth is, though, that law has almost never been enforced even when flagrantly flaunted.

Just a few weeks ago the Supreme Court ruled that a church in Missouri had been discriminated against when the state refused to subsidize improvements to the church playground. In the majority opinion, Chief Justice John Roberts wrote the state wrongly denied the church “an otherwise available public benefit on account of its religious status.”[2]

The notion that there should be a “wall of separation” between church and state is, at the same time, one of the more popular notions in our society and one of the most confused. The best way I know to proceed is to lay out a number of premises about what I think is true and what is false. I make no claim to inerrancy. On the one hand, there aren’t easy answers to all the questions. On the other, there’s a whole new pot of mischief brewing, with novel attempts to disguise bigotry as religious liberty. We have some hard intellectual work to do, including the recovery of history, to guide the claims we make and the commitments we take as people of faith and conscience. So let me begin with a list of eight premises.

On the other hand, people of faith come to public policy debates without any claim to privileged opinions. That justice should flow like a river is absolutely clear; what the plumbing looks like is a lot more complicated.

I consider myself a person of relative intelligence, possessing a measure of wisdom, and a vivid moral passion for justice. But I have friends and acquaintances who are at least as intelligent, as wise, and passionate who disagree with me. Until the Reign of God descends and arises in all its fullness, we will always need to debate and negotiate with others about the precise shape of the Beloved Community.

It was Williams who said, “Forced worship stinks in God’s nostrils.”[4] He wrote “It is the will and command of God that . . . a permission of the most paganish, Jewish, Turkish [meaning Muslim] or antichristian consciences and worships be granted to all men in all nations and countries.” The Puritans of Massachusetts kicked him out, and Williams fled to the wilderness of what we now call Rhode Island, where he literally formed the first Baptist church in the western hemisphere.

One of the most egregious examples of public officials attempting to undermine religious vision comes from 1962. A group of 200 business executives and university presidents formed what was called the Committee for Economic Development. The report they issued from is titled “An Adaptive Program for Agriculture.” One of the recommendations is this chilling statement: “Where there are religious obstacles to modern economic progress, the religion may have to be taken less seriously or its character altered.”[5]

I have in my files letters to the editor in the Asheville Citizen-Times which claim that “our faith is best practiced privately—not forced upon others”; and another, “We must all remember that one’s spiritual faith is a private and personal matter, best practiced in our homes and churches.”

We operate in an economy that blesses greed: that is to say, an economy that claims the common good will best be served if each pursues their personal interests. The only way to resist the rule of greed is to foster a transcendent vision which upholds a radically different way of envisioning and constructing our common life. One of the greatest reasons for hope we have is the emergence of leaders like Rev. William Barber who call for a “political Pentecost” of moral vigor.

Here’s what one doctoral candidate at Duke, which was founded by Methodists and Quakers in 1938, said about the university’s reversal: “I’m a secular person. I’m not against religion. I think religion is good. But it has its place—inside the chapel.” This is the kind of so-called “progressivism” that has gutted prophetic speech.

During the Nixon presidency, evangelist Billy Graham encouraged the president to expand on the annual prayer breakfast and have Sunday religious services in the White House. Nixon aide Charles Colson later recalled: “Sure, we used the prayer breakfasts and religious services and all that for political purposes. One of my jobs in the White House was to romance religious leaders. We would bring them into the White House and they would be dazzled by the aura of the Oval Office, and I found them to be about the most pliable of any of the special interest groups that we worked with.”[7]

Religious institutions, including this congregation, are considered tax-exempt. Is this exemption a worthy form of church-state separation? Or does the exemption actually muzzle the church and serve as a kind of bribery to keep our mouths shut? The IRS recognizes two categories of citizens that get to claim a housing allowance tax exemption: members of the military and clergy. And what about the fact that military chaplains are paid by the Pentagon?[8] Do these policies serve the common good, or do they compromise truth for security?

When Nancy and I were in seminary, the school wanted to be environmentally friendly (and save on heating bills) by installing storm windows. But since the building was on the historical registry, the city’s laws on historical preservation prevented the school from altering the building’s exterior. Common good? Or religious freedom?

Last year several French cities banned the “burkini,” a swim apparel designed to maintain modesty for Muslim women at the beach. Then someone reminded them that Roman Catholic nuns in traditional attire would also be banned from the beach. The French Supreme Court overturned these local laws. Common good? Or religious freedom?

Several places in Europe have banned burqas and hijabs worn in public by some Muslim women. Common good? Or religious freedom?

About a decade ago some of the children in our Circle made the conscientious decision to refuse saying the Pledge of Allegiance that begins each day in public schools. For a time a group of families held a lively discussion about this choice. Common good? Or religious freedom?

The questions pile up. We are pushed to ask, in what ways does the separation of church and state serve to protect the state? And in what ways does it serve to protect the church and preserve its prophetic voice? On what terms should people of faith be explicitly involved in public policy debates, and when should people of faith maintain its distance from partisan commitments?

Some of the answers are pretty simple. Others are incredibly complex. So we have a lot of work to do.

Our testimony needs to be clear: Faith is not an abandonment of the conflicted arena of history, but a fierce engagement driven by a particular bias—though to maintain critical independence and redemptive leverage, we must refuse in some circumstances to wield partisan favor. There are times when we rightly practice modesty in the debate over truth claims.

Yet our witness needs to be adamant: God is more taken with the agony of the earth than with the ecstasy of heaven. The God of Scripture has an incessant, demanding, and overriding bias in favor of those who are pushed to the margins of our social, political and economic institutions. Placing ourselves on the margin—in any number of ways—is at the heart of our calling. And being at those margins as friends, not as managers, is crucial.

None of these things are easy. But as Jesus reminded his disciples: I didn’t say it would be easy. I said it would be worth it.

[1] Since this sermon was given, a stunning example of “religious liberty” mischief occurred. On Tuesday 11 July Attorney General Jeff Session spoke at the “Summit on Religious Liberty” sponsored by the Alliance Defending Freedom (ADF), which is considered a hate group by the Southern Poverty Law Center. No reporters were allowed to attend, and the Department of Justice has refused to release the text of his speech. Founded in 1994, the ADF offers legal training to equip participants to “effectively advocate for religious liberty, the sanctity of life, and marriage and family.” Although Sessions has pledged to enforce federal hate crimes laws, as a Senator he was opposed to the 2009 Hate Crimes Prevention Act. —Laura Jarrett, CNN http://www.cnn.com/2017/07/12/politics/jeff-sessions-alliance-defending-freedom-summit/index.html

[3] “Every era manufactures a heresy proper to the times. Quietism is ours. We call it ‘separation of church and state’ now, but the effects are basically the same. Rather than defend the original meaning of the proposition that no single religion shall be our state religion, we misuse the concept to silence ourselves in the name of spirituality. We ignore the public arena and call ourselves ‘spiritual’ for doing so. We silence ourselves in the name of spirituality. We remove ourselves from things that are ‘passing.’ We aspire to ‘higher things’ than civil justice or care for the oppressed. We forgive ourselves our disinterest in the questions of our age on the grounds that those things have nothing to do with being Christian. Only the laws and the customs have something to do with being Christian, we argue, not the gospel.” Joan D. Chittister, Called to Question: A Spiritual Memoir