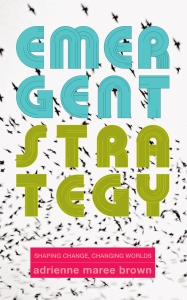 It is so important that we fight for the future, get into the game, get dirty, get experimental.  How do we create and proliferate a compelling vision of economies and ecologies that center humans and the natural world over the accumulation of material?

We embody.  We learn.  We release the idea of failure, because it’s all data.

But first we imagine.

We are in an imagination battle.

Trayvon Martin and Mike Brown and Kenisha McBride and so many others are dead because, in some white imagination, they were dangerous.  And that imagination is so respected that those who kill, based on an imagined, radicalized fear of Black people, are rarely held accountable.

Imagination has people thinking they can go from being poor to a millionaire as part of a shared American area.  Imagination turns Brown bombers into terrorists and white bombers into mentally ill victims.  Imagination gives us borders, gives us superiority, gives us race as an indicator of capability.  I often feel I am trapped inside someone else’s imagination, and I must engage my own imagination in order to break free.

…We must imagine new worlds that transition ideologies and norms, so that no one sees Black people as murderers, or Brown people as terrorists and aliens, but all of us as potential cultural and economic innovators.  This is a time-travel exercise for the heart.  This is collaborative ideation–what are the ideas that will liberate all of us?

One thought on “Imagination”