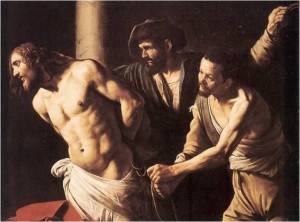 This piece was developed during the second Bartimaeus Institute Online (BIO) Study Cohort 2016-2017.  These pieces will eventually be published in a Women’s Breviary collection.  For more information regarding the BIO Study Cohort go here.

To appreciate the significance of the female artist Artemisia Gentileschi, 1593-1653, we must first understand the men who helped mold her. Such is true of many of the female artists during the pervasive, unyielding patriarchy, as seen in the Italian Renaissance. Growing up in the 17th century, Artemisia Gentileschi spent much of her early life being defined as the daughter of celebrated artist, Orazio Gentileschi. The senior Gentileschi was a pupil and follower of Caravaggio, a renowned male artist who was known for capturing emotion through his biblical renderings.  Caravaggio was to the 17th century art scene as Leonardo Dicaprio was to every adolescent girl in the 1990’s- a big deal. His revolutionary style encouraged the movement of artistic realism based in biblical narrative. In an era when written word was directed exclusively to the highly educated, the realist movement also appealed to the illiterate, breathing life into viewer’s emotions and stimulating a devout religiosity amongst Italians.

Though Caravaggio is the one credited in Art History texts as the incendiary artist who shaped Realism, Artemisia’s work in the realist movement has roused the interests of modern-day pupils studying the late-Renaissance art world.   During the 1600’s women were not well received as artists, and required either money or privilege (and often both) to pursue artistic careers. Apprenticeships and formal academic training were commonly available to men, while female artists were subject to requisites of wealth, artistic pedigree, or had to spend life in a convent in order to learn the skills demanded of “true artists”.  Fortunately for Artemisia, her father, Orazio, encouraged her artistic talents and took an active role in her formal training. By the age of twelve, Artemisia expressed a natural aptitude for painting. Well before her twentieth birthday her work had surpassed that of her father and her many tutors.

Restricted access to art academies for women stemmed from a cultural response to protect “fragile females” from the impurity of unclothed male art models. Rebelling against these oppressive norms, Artemisia hung a mirror on the ceiling of her chambers and learned to paint the human form by studying herself.

Thus her paintings took on an autobiographical form. At seventeen, Artemisia painted Susanna and the Elders. The painting brought life to the biblical story of Susanna[1] who was lustfully observed by two lascivious elders while bathing in her garden. Once seen, the elders attempt to blackmail Susanna by threatening to present her as a promiscuous woman who lured them into a sex trap, should she refuse their sexual advances. Susanna declines their advances and is arrested and later sentenced to death by the judges who believed the elders’ story.  Denying Susanna’s guilt, a young man named Daniel suggests questioning each judge separately to determine the facts of the interaction. It is through this inquisition that the truth is revealed, and Susanna is freed.

Artemisia was not the first to paint Susanna and the Elders. However, her depiction was the first to give Susanna an active role in her own story. Comparing Tintoretto’s masculine depiction of Susanna to Artemisia’s (see images below) one can see how Artemisia’s (left) captures Susanna’s protest and the licentious advances of the elders; whereas Tintoretto (right), depicts Susanna as a woman studying herself in the mirror while (passively) inviting the attention of the innocently curious elders.

At age 19, Artemisia, like Susanna, went on trial to defend herself in a case of rape.  The trial brought charges against Angostino Tassi, Artemisia’s art tutor, who defiled her against her will and stole one of her father’s most valuable paintings as a gesture of his dominance. Throughout the trial, Artemisia was put on stand and forced to recount the scene in front of friends and family, while Tassi struggled to prove his innocence.  Because of protection from the Pope, who was a fan of Tassi’s work, Artemisia’s rapist went free, and she became the object of incessant gossip. Rather than retreat into her own solitude, Artemisia armed herself with the only weapon she had–a paintbrush—and painted with even more fervor than before.

Artemisia’s rendition of Judith Decapitating Holofernes[2] captured an element of the biblical story no male artist had ever focused on- female autonomy and strength.  Artemisia shows Judith in a position of power and highlights the strength required to behead such a brute man (see below the contrast with Caravaggio’s rendition of Judith’s cut as detached, almost surgical). But it also provided the scene with a revolutionary proposition – what would it look like if women worked together to fight back against a world dominated by men? Artemisia’s life is an extraordinary example of a woman in the pre-modern era taking a stance against the oppression that was just part of everyday life. As such, she is a feminist icon.

One thought on “Artemisia Gentileschi: A Hero Among Women”