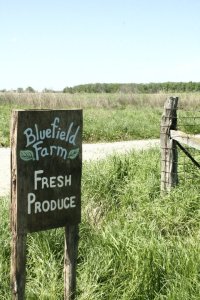 As to the eating of food offered to idols, we know that “no idol in the world really exists,” and that “there is no God but one.” Indeed, even though there may be so-called gods in heaven or on earth–as in fact there are many gods and many lords– yet for us there is one God, the Father, from whom are all things and for whom we exist, and one Lord, Jesus Christ, through whom are all things and through whom we exist.

“Food will not bring us close to God.” We are no worse off if we do not eat, and no better off if we do.

The summer of 2012 was hot in the Midwest. By the fourth week of temperatures over 90 degrees, and over two months without rain, the grass was brown and our crops in Northeastern Indiana were not faring any better.

I lived on a 26 acre farm, 3 acres of which my community and I were homesteading and vegetable gardening. Our farm–”Bluefield Farm,” named after the abundant chicory with its blue blossoms–was an oasis in the middle of an industrial agriculture desert. Summer evenings highlighted this. You could climb the roof of our barn and see our pastures and the night air above them glowing with the mating rituals of fireflies populating our land; in contrast, the farm fields around us were dark, bleak, and barren. This nightly event was a reminder that our insistence on working with spade and hand rather than by tractor and chemical mattered a great deal to the community of creatures who shared the land with us.

But it was another event that summer–a disaster–that truly marked the difference between industrial food production and the small-scale agroecology we practiced on Bluefield farm. Up the road just a quarter mile was another kind of farm. A chicken farm, called Automated Egg. This was an egg production facility, alleged to provide all the eggs for all the Kroger grocery stores east of the Mississippi. I believed this to be true, because it consisted of four buildings, each a quarter-mile long and one hundred yards wide. The factory boasted of two million hens, each housed in a cage constructed such that the daily egg born of their bodies was moved on a conveyor belt to be collected, cleaned, bleached, and packaged. Production was mechanized to facilitate as little contact as possible. Workers were still needed for various tasks–one of the inauspicious duties was the daily chore of collecting birds dead in their cages and throwing them out.

I was in town one scorching day when I heard the news from one of the locals–the giant fans, big as airplane engines, just couldn’t keep up with the heat and broke down. Those big buildings became giant ovens, and three hundred thousand chickens died from hyperthermia.

When I got home from town, I rushed over to our small chicken coop, constructed of leftover odds and ends of wood and tin nailed onto a frame of two by fours. Our ten hens were fine, pecking away at the occasional insect, and fussing about as they generally did under the shade of a tree. For the rest of the day, though, I could hear the commotion of large machinery in the distance. I was told that they buried the dead chickens–all three hundred thousand–in a massive heap of feathers, flesh, and bones.

The Church Body in Corinth and Colonized Bodies

The lectionary reading suggests that this passage is opportunity to reflect on divine authority, liberty and conscience. But by my reckoning this week’s reading is less about gods and more about bodies.

Paul’s remark, “in fact there are many gods and many lords,” testifies to his acknowledgement of the veneration of not only more traditional gods, but also the political elites of Empire. Ultimately, though, Paul’s pronouncement that there is one God, the Father, and one Lord, Jesus Christ is a critique of empire and its cultic apparatus–if Jesus is Lord, Caesar isn’t, and if God is father, then Caesar is not pater patriae.

Critique of the Roman Empire did not only come from the resistance communities planted by Paul and his apostolic contemporaries. Voices from the periphery of the empire are well-documented as well. Tacitus records the speech of Calgacus, which represents the reputation of Rome in the borderlands: “To robbery, slaughter, plunder, they give the lying name of empire; they make a wasteland and call it peace” (Agricola 30). In that same speech, Calgacus goes on to directly connect empire with the extraction of food and the conscription of bodies:

Our goods and fortunes they collect for their tribute, our harvests for their granaries. Our very hands and bodies, under the lash and in the midst of insult, are worn down by the toil of clearing forests.

Twenty years before Calgacus, the woman warrior Boudicca had a similar critique of the Romans: “Have we not been robbed entirely of most of our possessions, and those the greatest, while for those that remain we pay taxes? Besides pasturing and tilling for them all our other possessions, do we not pay a yearly tribute for our very bodies?”

When Boudicca led an uprising of the Britons against the Romans occupiers, the first target was Camulodunum, a colonia inhabited by Roman veterans, just like Corinth. Moreover, Camulodunum was the site of a temple dedicated to the former emperor Claudius, built at the expense of the local Britons. Boudicca and her comrades demolished the city and systematically dismantled the temple. The Britons would no longer tolerate being crushed by the imperial cult.  Destroying the temple of Claudius, therefore, was a religious act, just as Moses’ destruction of the golden calf was a religious act–gods matter because bodies matter. By smashing the religious edifice of the system, Boudicca forcefully asserts that Caesar is not god, and that her body does not belong to him.

The darkness I saw surrounding Bluefield farm in Indiana was a symptom of the yearly slaughter of the soil and consequent loss of the fireflies. So too, was the death of hundreds of thousands of chickens ultimately the result of the same imperial spirit that Paul, Calgacus, and Boudicca articulated and resisted. Rome made a wasteland and called it peace; Monsanto spreads darkness and calls it corn; Automated Egg creates flesh factories dependent upon exploited labor and calls it protein.

I think I understand Paul’s point. Ultimately, what we eat does not bring us closer to God. There is no magic in the meat, no wizardry in the wine that somehow changes our proximity to the divine. But food matters because bodies matter. We are not separate from the systems that feed us. Our bodies are a part of the unbroken flow of energy from the rock in the stream to the hawk in the sky. And that is why what we eat is important. Indigenous ecologist Robin Wall Kimmerer points us toward a right relationship with food in her outline of principles she calls the Honorable Harvest:

Ask permission of the ones whose lives you seek. Abide by the answer.
Never take the first. Never take the last.
Harvest in a way that minimizes harm.
Take only what you need and leave some for others.
Use everything that you take.
Take only that which is given to you.
Share it, as the Earth has shared with you.
Be grateful.
Reciprocate the gift.
Sustain the ones who sustain you, and the Earth will last forever.

Before Boudicca led her warriors into battle, she reminded them that by virtue of their relationship to their landscape, they had more security than the Romans:

They require shade and covering, they require kneaded bread and wine and oil, and if any of these things fails them, they perish; for us, on the other hand, any grass or root serves as bread, the juice of any plant as oil, any water as wine, any tree as a house. Furthermore, this region is familiar to us and is our ally, but to them it is unknown and hostile. As for the rivers, we swim them naked, whereas they do not across them easily even with boats. Let us, therefore, go against them trusting boldly to good fortune. Let us show them that they are hares and foxes trying to rule over dogs and wolves.”

Changing our diet will not change the food system. But to the degree that we are able to support locally grown and honorably harvested food, we increase our resilience. The more we increase our knowledge of wild edibles, of natural water sources, the less we depend on a food system that oppresses workers, exploits animals, and destroys soil.

So smash the idols of empire. Denounce colonization in all its forms. Love the fireflies by keeping the grass unmown. Say that the camas bulb is your bread, and mountain spring your wine. Let an oak be your shelter. Look for Boudicca, the indigenous woman leading the resistance. She is still here. Keep chickens, if only to know some will survive the coming heat. Swim the river naked.  Let your watershed be your ally and your ecosystem your accomplice. Trust boldy in the interconnectedness of all things. “Sustain the ones who sustain you, and the earth will last forever.”

David Pritchett grew up in the mountains of Kenya, where he saw firsthand the abundance of nature and the possibility of land-based subsistence.  Now he lives in Cascadia at the confluence of the Willamette and Columbia Rivers, on occupied land inhabited by the Multnomah, Clackamas, and other Chinookan peoples. As an associate medical director of a detox center and a permaculture designer in Portland, Oregon, he works toward the health and recovery of people and landscapes.  He enjoys volunteering his skills in organizations like Ecofaith Recovery and Portland Fruit Tree Project, and cherishes time spent with the Wilderness Way community.