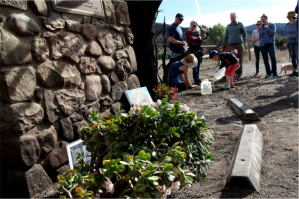 Note: This reflection was given at a Farm Church gathering at the Asistencia memorial site in California’s Ventura River Watershed on Sunday, Jan 14, 2018 (right; young Wesley Lehman waters a newly planted sycamore seedling; all photos of the gathering by Chris Wight). You can also find it on Ched’s blog.

This weekend we as a nation rightly commemorate the life and work of Dr. Martin Luther King, Jr. So a good place to start our circle this Sunday morning before the national holiday is with this passage from King’s 1963 book Why We Can’t Wait:

Our nation was born in genocide when it embraced the doctrine that the original American, the Indian, was an inferior race. Even before there were large numbers of Negroes on our shores, the scar of racial hatred had already disfigured colonial society. From the sixteenth century forward, blood flowed in battles of racial supremacy. We are perhaps the only nation which tried as a matter of national policy to wipe out its Indigenous population. Moreover, we elevated that tragic experience into a noble crusade. Indeed, even today we have not permitted ourselves to reject or feel remorse for this shameful episode. Our literature, our films, our drama, our folklore all exalt it.

Dr. King summarizes why we are gathered as Farm Church at this unusual venue and time, for a special commemoration of a history that lingers in this very spot. [Right: Mattie Grinnell, a 101-year-old Mandan tribeswoman, speaks to the press outside the Supreme Court during the 1968 Poor People’s Campaign in Washington, D.C.]

Mohecan activist Jim Bear Jacobs taught us that westerners tend to steward our narratives through texts, while indigenous cultures understand their sacred history to be embedded in the land. The land holds the stories. And this Asistencia Santa Gertrudis memorial site is just one small, indeed hidden, chapter in the long and sordid history of Settler displacement of indigenous peoples that marks every single square mile of Turtle Island.

I want to begin by confessing that we really don’t know how to do this sort of commemoration adequately and in a good way. We are not practiced at facing the sins of our ancestors—thus, as the prophet Jeremiah famously put it, their “eating of sour grapes” continues to “set our teeth on edge” (Jer 31:29). But the only way to learn is to experiment, however stumbling. Repentance means struggling to turn around our history—both personal and political. This service is a very small attempt to remember and recommit to restorative justice, right here in our watershed. Indeed, we Christians have a special responsibility, because we actually have a tradition of repentance, unlike American imperial culture. And because we were, and are, so deeply complicit in past and ongoing histories of injustice toward first peoples.   So in light of that fact, we will not celebrate communion today, a symbolic fast in light of the seriousness of these matters. Rather, we will celebrate life with a planting ritual.

The “Asistencia Santa Gertrudis” (named after Saint Gertrude the Great, a favorite of medieval Iberian Catholics) was an outlying chapel from Mission San Buenaventura.  Records indicate it was constructed sometime between 1804-08.  Along Ventura Ave. is an obscure roadside memorial to this long-disappeared structure.  It “served the Indians in the early days,” says the plaque, erected by a local historical society.  But there is more to the story than that, and we’ve been intrigued to discover it since we moved into the valley in 2005.

The chapel site was located near where the El Camino Real branched off up over the mountains toward Santa Barbara (roughly following the path of modern day Casitas Pass Road); it was also situated near a tree sacred to the indigenous Chumash. Yve Chavez, in a recent UCLA dissertation entitled “Indigenous Artists, Ingenuity, and Resistance at the California Missions After 1769,” argues that even as the Franciscans were trying to wean the Chumash off their “pagan” ways, the latter were appropriating the former’s spaces to continue their traditional ceremonies (see here, pp. 80-87). 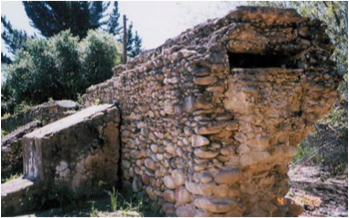 However much this Asistencia may have “served the Indians,” it was also the site of a native labor camp.  Here local indigenous “neophytes” were forced by the Spanish to dig clay from nearby Red Mountain, and build a seven mile adobe and stone aqueduct that steered water from the Ventura River to the Mission in the first decades of the 19th century (ruins at left). 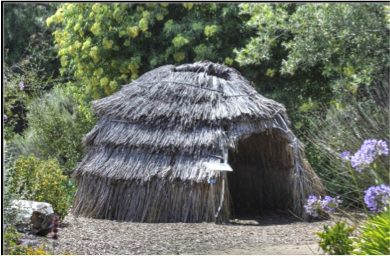 During the Mexican period (1820-1848) of coloniza-tion, the Mission was secularized and went into decline. But around the Asistencia Santa Gertrudis grew a village of refugee Chumash families who had been pushed out of their villages by European and American settlers.  Their traditional aps, or brush huts, inspired Mexicans to call the site “Casitas” (right, an ap in the San Luis Obispo Botanical Garden at El Chorro Regional Park.)  This name survives today on the local landscape in several places (Casitas town, lake, road)—though its origins would not be known to most residents!

In fact, we don’t know much about this little native settlement of the mid-19th century—and the historical plaque tells us nothing.  Multiple reports by late 19th/early 20th century settlers attest that Chumash families farmed by the river and sold produce to Ventura, and that there were significant fruit orchards planted around the Asistencia (Fr. Rubio, padre at the Mission from 1870-97, reportedly continued an old tradition of cutting their branches for Palm Sunday services).

A diseño (survey map) dating to 1847 for the land claim case of Joaquina Alvarado for Rancho Cañada Larga locates the Asistencia, and testimony in the case indicates that there were Chumash living there at that time.  A 1932 book on local history claims the chapel was used as late as 1868—remarkably, well into the American period—and still occupied at that time by Chumash families.  An 1864 proto-anthropological study states that in 1861 “Old Luis, a former Mission alcalde considered Chief of those Mission Indians yet in the area, reported that he had forty subjects at the Cañada in San Buenaventura valley.”  But by 1881 settlers reported that the Chapel was in ruins, the site long abandoned. Shortly thereafter the remains were plowed under by Salmon Weldon (after whom Weldon Canyon was named, site of a hard fought campaign to stop a landfill in the early 1990s).  The land was put into cultivation: apricots, then citrus, then beans. 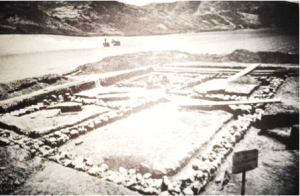 Almost a century later, the long-lost site of the Asistencia was rediscovered by Cañada Larga ranch foreman Mike Pulido while plowing the beanfield. The site then underwent a hurried “emergency archaeological salvage project” excavation in the spring of 1966 (at left).  Significant indigenous artifacts were found in and below the Asistencia layers, testifying to the profound changes in Chumash lifeways as a result of Spanish colonization.

On January 25th, 1968, the remains of the dig were summarily removed and buried in a pit nearby, and the site paved over by the 33 freeway spur. We are remembering that 50th anniversary today.

Mike Pulido’s son is my barber, from whom I first heard about this history. His wife Carol is a Chumash cultural officer, who has been helpful in teaching us about the history of this place.  As a young woman she took part in the 1966 excavation, and says that the 1968 destruction of the historic site could never happen today, thanks to slow but steady improvement in cultural remains legislation fought for by native advocates over the last several decades.

Over the last couple of years we have kind of “adopted” the Asistencia site, researching its deeper native history, trying to figure out with Carol how to better commemorate its full story, watering the plants there, and keeping it clean of trash.  People occasionally leave mementos at the site, so obviously a few others remember as well.

Artist friend Robert Valiente- Neigh-bors did an internship with us in 2016 in which he painted or etched beautiful portraits of both Mike Pulido Sr. (at right) and Carol Pulido (left).  He has also just produced several prints depicting the evolution of the site over two centuries.  We will eventually figure out how to turn this material into some sort of online tale of the site.

During last month’s Thomas fire, the flames jumped Highway 33 right at the Asistencia, and the site was torched.  Nothing remains but the stone monu-ment, metal plaque and the skeletons of the juniper trees originally planted there. (Apparently the same thing happened in the Cañada Larga fire of 1986, since the plaque says it was rededicated then.) We see this as an opportunity to begin to remake the site in a way that tells the fuller story. 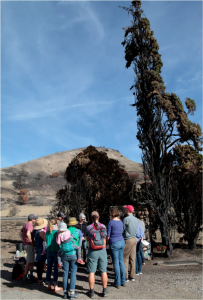 This is why, on the 50th anniversary of the CalTrans destruction of the Asistencia excavation, we came to pay respects (left). It is part of our modest but sincere attempts to re-member history, in order to discern what restorative justice means in our watershed.

Note:  Many of the above details (as well as the photograph of the excavation) were gleaned from the published report of the 1966 excavation: Roberta S. Green-wood and R.O. Browne, “The Chapel of Santa Gertrudis,” Pacific Coast Archaeological Society Quarterly (4:4), October 1968, pp 1-60.

One thought on “Re-membering the Asistencia Santa Gertrudis”