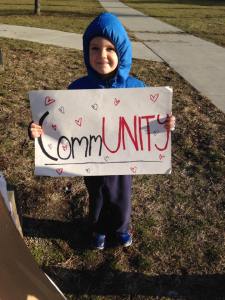 There has been a small, weekly vigil happening across from Isaac’s school for a year now. It started when a young girl told a social worker at school she was afraid of her friends and family being deported. When the social worker asked her if there was anyway that we could support her family, the little girl said she would feel better if ICE could see that people cared. So, this small vigil is one attempt at that- to publicly say to ICE that we stand with our neighbors and that we are paying attention. There is a commitment to keep standing in solidarity until there is a justice immigration policy in place and children can live without fear.

I’m embarrassed to admit how few times we’ve made it to the vigil especially since it is right after school on Fridays. But last week, on a surprisingly sunny January afternoon, we got ice cream and headed to the vigil. Isaac leafed through the signs looking for the right one to hold.

“What does this one say?”
“Community.”
“What’s community?”

Crap! #parentingfail How could we have missed that early vocab word??But of course, I know that Isaac does know what community is even if he didn’t know the word. He knows because we are at this vigil. Because he knows the names of most of his neighbors. Because there are other parents who pick him up at school sometimes. Because we have people over to eat. Because he knows the name of the river that flows by our house and the names of most of the plants in our yards. Because of the million little interactions we have that I am so grateful for in this place.

And also because we do talk about it. On the way to school earlier than morning, Isaac said “Is Trump bad?”

“I don’t usually think that anyone is bad, but that sometimes people do bad things. But Trump does a lot of bad things.”

My brain was a fumbled mess as I tried to give some examples “Like take money away from people who need it, from schools, he wants to send our neighbors away if they don’t have the right papers, he says a lot of really mean things to people, he doesn’t treat people well, sends people to jail.”

“Do you think that he will do it to us?”

“Hm… I think there are some ways he does, like not thinking it’s important to give your school the money it needs. I think that it’s really important to support our neighbors or anyone who is being hurt by what he says and does, because we know that our neighbors would help us if we needed it.”

“But if he going to come to our house and take our money, I have to hide my money.”

“He won’t take your money. If he would take money, it would be from mama and it wouldn’t be all of it.”

“If he does, you and mama can have my money.”

Of course minutes later I am thinking of the things I wish I had said or flubbed, but something must have stuck cause a few nights later, we were praying before bed and he said he wanted to pray “for all the people that were going to jail and who Trump is taking their money. That he won’t do that any more.”

Then he said, “Maybe Trump takes their money because he doesn’t have any.”

“Actually, he has more money than almost anyone in the world.”

“I know what we should do, we should send Trump a Whoopi cushion.”

“Oh yeah, what would the note say?”

“Sit on this and it will make a farting sound.”

So, there’s that. What else can I say?

One thought on “Learning from Laughter and the Trees: Dear Trump #2. The perfect gift.”