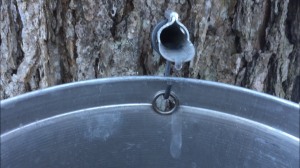 I recently moved from southern Ontario near Toronto to a north-ish rural community near Bancroft, Ontario – north-ish because we are really at the southern end of the north. My partner and I live most of the time in the manse in town, where she is the minister, and the rest of the time in the cabin on a 64-acre piece of mostly forested Land which has been deemed “marginal agriculture” by those who are supposed to know these things. I left my congregational ministry position to move here to live and labour on the Land and in this community. It has never been my dream to be a farmer, but I keep reminding myself that the Spirit moves in mysterious ways and that I may just bloom where I am planted.

It was in the move that I rediscovered Sallie McFague’s book The Body of God: An Ecological Theology (1993). Before finding it a place on our bookshelf, I decided to give it another perusal. This time I was struck by what is called “attention epistemology” which she describes as “the kind of knowledge that comes from paying attention to something other than oneself” (49). In doing so, the observer can come to realize that others, things, have value, meaning, and existence independent from anyone else and that they serve no utilitarian purpose. The bird swoops, the creek burbles, people walk, all unrelated to me and have intrinsic value in and of themselves. Further, they are not to be monetized or utilized or serve any purpose other than to be who and what they are. Attention epistemology is, as McFague writes, the “opposite of means-ends thinking” in that whatever I happen to clap my eyes on is not there simply to serve some purpose for me. Thus, all things are radically distinct from one another. Biblically, God observes creation and says, “It is very good” (Genesis 1:31) of which Simone Weil writes, “God, if He exists, is good because He delights in the existence of somethings other than Himself” (51).

The flip-side to this radical particularity of all things is the notion of radical unity of all that is which McFague calls “ecological unity” (55), but that is not my focus here.

Attention epistemology grabbed my uncomfortable attention because of what I have found myself doing. As I wander the Land, I almost reflexively look at almost everything as something that can be of utility to me: the tree becomes a source of heat or, in the case of a sugar maple, sap; the turkey and rabbit look like food, etc.

The rapacious hunger to consume, the presumption that we can take whatever we want for our own use, is a major piece of what has led humanity to the current ecological crisis. There is a drive to more and more. Our market system is set up such that we make money through growth. My member of parliament recently extolled the growth of the Canadian economy over the last quarter year because that is said to be a measure of success. When will it end? The earth is not a bottomless pit from which to draw forth resources.

The Decalogue (Exodus 20:1-17) addresses the problematic human condition of seeing things outside of ourselves as existing for our purpose. In giving the commandments to the people God first reminds the people that it is God who saves the people, not people God. The first three commandments deal with how the people are to be in relationship with God, the others with how we are to be in relationship with each other. It’s fairly basic stuff: respect others; don’t take what isn’t yours whether it is someone’s stuff or life. In fact, don’t even think about how nice it would be if it was yours (v 17). When seen through the lens attention epistemology – the commandments become a “how to” on recognizing the intrinsic value of what is outside of oneself.

Taking a different tack: if everything has to serve some sort of purpose or utility that means I must serve some purpose and must be purposeful. How then can I ever take a Sabbath (vv 8-11)? As has been said often before: God took a Sabbath because God’s work was done; God gave us the Sabbath because our work is never done. Our value is not measured by how purposeful we are.

Also problematic is the attempt to make God serve one’s own “utility”. This leads to a monetization of faith – if I do this good work or behave in a certain way, then God will look on me with favour. I believe this is what Jesus was taking issue with at the temple. The focus, rather than on the people’s relationship with God or how they were turning their attention back to God again, instead became the market place. Worship became a commodity, and something on the “to do” list. As prophets before him said, the point of making the sacrifice isn’t the sacrifice itself, but the heart with which it is done and that one’s lived faith reflects God’s will (e.g., Hosea 6.6; Psalm 51:16f; 1 Samuel 15:22; Amos 5:21-24).

I find it easy to despair, wondering how to live my faith as I seek to reap what I need from the Land, but also not live out of the presumptive attitude that all I see is mine for the taking. Thankfully I have found wisdom for a way forward from Peter Wohlleben, a research forester and author of The Hidden Life of Trees (2016), who has found a balance between recognizing the intrinsic value of each independent tree and the need to ascribe trees a utility for his own use (and the company for whom he works). Wohlleben writes of his deep connection with trees whom he encounters as individuals and as a community, and of the heretofore unknown ways in which trees communicate and interact with each other. He also offers his own practice of sustainable forestry as an example to others as not just a means of responsible forestry, but one that also respects the trees as beings of intrinsic worth unto themselves.

Another way forward comes from the wisdom of my Indigenous neighbours who encounter Nature with deep respect and as part of “all our relations”. Creator makes all that is, including humans. Each are a part of all that exists. The human is no greater than the others. When hunting for food, the hunter gives thanks for the life offered by the animal that allows humans to live. It is a sacred act to hunt.

As my partner and I tapped the maple trees this week for some of their life-force, i.e., sap, we did it as a sacred act. We spoke to each tree, giving thanks to her for what she would offer us, and giving thanks to God for God’s amazing work of creation (not marginal in the least). Later when we are nourished by the syrup, tasting the miraculous sweet gift, we will give thanks again, recognizing and remembering again that it wasn’t simply ours to take, but that it had been given.

Svinda calls Maynooth, Ontario, and a piece of Land close by home. Both homes are in the unceded territory of the Algonquin Nation. The cabin on the Land is on the ancient shores of what was Shawashkong Lake, the maple trees are in what is now the valley. Svinda is a minister in the United Church of Canada, most recently with Trinity United in Grimsby, Ontario. Now she is finding her way as a reluctant, but enthusiastic farmer ever embracing her life’s motto “How hard can it be?”. She and her spouse, Marilyn Zehr, are also on the brink of starting a forest church that will meet on the Land. For more visit riseabove470.wordpress.com

Wild Lectionary, a weekly reflection on land, creation and environmental justice themes in the texts of the revised common lectionary, is curated by Laurel Dykstra, gathering priest of Salal + Cedar, Coast Salish Territories.

One thought on “Wild Lectionary: Thoughts from a reluctant farmer”