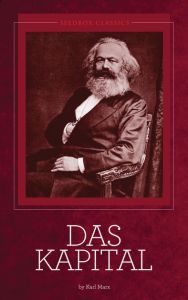 The first time I was ever stopped and searched by the police was on the way home from an anti-fascist protest.  The most seditious thing I had in my bag was a copy of Das Kapital by Karl Marx. I’d bought it on the way to the protest, but the fact that the police who were going through my stuff commented on it negatively just made me want to start reading it even more enthusiastically later that night!

Over the next few months, I trawled through the pages. It was obscenely difficult to understand.  I made pages upon pages of notes and repeatedly Googled terms I didn’t understand, but eventually I came stumbling over the finish line to the end of the book. Soon after, I went through it twice more–once with a local Marxist reading group and once with the aid of David Harvey’s free online lectures. Since then I’ve gone on to read many more works by both Marx and Engels, a few by Lenin and a number of more modern Marxist articles and pamphlets and even contributed a few of my own to a Marxist journal.

Discovering Marxism for me was huge.  I was already firmly on the far left. I had spent a few years with anarchism reading books such as Kropotkin’s Conquest of Bread and Ward’s Anarchy in Action and anti-war demonstrations, meeting housing activists and getting a long to as many anti-fascist protests as possible. What Marxism seemed to offer that I hadn’t been able to find so far was a unified, consistent and developing theory. Anarchism had some really beautiful ideals and could dabble in intellectually satisfying theory but too often seemed to be constantly re-imagined and attempts had to be made to try to re-state the basics, but with no coherent platform answers to new challenges and questions just had to be dreamed up. My trouble has been that I found anarchism much easier to reconcile with my Christian faith than Marxism.

I studied a BA-hons at the London School of Theology from 2006-2009. My final year project was entitled “to what extent is the gospel good news to the poor and bad news to the rich?” I answered “very” to both. Alongside this, I have been working with homeless people since 2005 until the present and I have found that this has unavoidably shown me how society really works, first hand.

Anarchism is extremely broad and flexible.  As long as there is a general commitment to oppose hierarchy in society you can pretty much mix it with anything you like. I loved the idea of an anarchist eschatology, a utopian post-revolutionay society of peace, abundance and radical equality and how this might be understood as like the Christian vision of the Kingdom of God, come to earth in all it’s fullness. I still do. As I have said, though, Marxism has been tougher to place. It is seen by many of its adherents and opponents alike as a necessarily atheistic philosophy, but it seems to make sense of social phenomenon so well. What approach can Christians on the left take to interact with Marxism?

This is something I’ve spent some considerable time thinking through. I probably haven’t got all that far and this can only be an introduction but consider the following argument for what I consider to be a useful conceptualization.

Marxism attempts to analyze human history as a science. Marx and Engels developed a model based on the idea that a lot about society can be linked back to the way that important goods for sustaining human life get produced and distributed. They showed that the basic economic system is developed first but this is then enforced by a political system and justified by a philosophical system to keep it stable for those who are running the show.

They showed how capitalism is a system where people who have capital to invest put it in at one end of the business cycle and somehow get more back at the other end in the form of profits, rent and interest. They showed that the explanation for this was that the people who did all the work were being exploited whilst society was gradually being shaped around the needs of capital, personified in the capitalist, in it’s constant drive to expand – a dictatorship of capital.

Marx, in Das Kapital, showed that the forces that capitalism created within capitalist society also included a large working class who were being increasingly unified and trained as a by-product of this system to think and act not just as a class in themselves but as a class for themselves and that history was bending towards their eventual victory and the establishment of socialism the means by which things are produced could be owned and managed collectively and resources distributed according to need. Marx did not see socialism as “better” in a moral sense.  He simply saw it as the future and a future that was in the interests of working class to bring about as soon as possible.

If Marxism approaches human history, past, present and future and how this is linked to the political world from a scientific perspective, then Christians who are interested to learn more about it should really go to it on its own terms to find out if it is successful in doing so before listening to those people who just want to say that it’s “bad.”

Thankfully, we already have a fairly well developed theology for how Christians can understand science. Leaving aside the anti-science and anti-intellectual Christian right, we still have some pretty fuzzy ideas going about such as the “God of the gaps” theory whereby Christians locate God and God’s action only in things that science can’t explain, or can’t yet explain. Instead of this approach, it is better to see God’s action in everything and to see science as a human search to understand how God has ordered the universe, a universe which is, importantly, rational and capable of being understood.

Instead of cordoning off human history and trying to protect it from attempts to scientifically explain how it works, let’s understand that there are scientific processes, ordained by God working within human history, and if Marxism is correct bending human history towards one of God’s promises in the Bible: Psalm 37:11 “The poor shall inherit the earth”. Marxists may want to use this approach, known as “historical materialism” as a holistic philosophy on life the universe and everything but that doesn’t have to stop Christians from using it as a tool and as having a place within our world-view.

The good news is that this is the kind of thing that Liberation Theology has been saying for some time. The Church in certain times and at certain places has managed to work alongside Marxist socialist movements to discern what God is doing in society and get on to the right side of the struggle. In Latin America, this has been especially the case and in Nicaragua large sections of the church assisted the Sandinista revolution in overthrowing a capitalist regime. These things, to me, seem worthy of more study and more attention.

Dennis Moore has been a Christian since 14, but  only really grasped what it was all about a few years later when he spent 6 months in Latin America working with churches and doing some practical aid work. Since returning to the UK, he’s been working with homeless people, as well as studying theology and getting out to various protests and actions on weekends. He discovered the liberation theologians and then anarchism, anti- fascism and, more recently, Marxism. He takes influences from them all and is still full of questions and things he’s intending to discover more about.

3 thoughts on “Worthy of More Study and Attention”