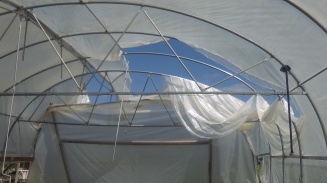 Greenhouse where the author works, after Hurricane Irma

Salvation. I imagine my educated friends skating over the term in today’s reading. After all, Pentecost is an incredible story about harmony in diversity. That is an important theme, and one most educated folks are eager to pick up in these troubled times. Let’s find a way to have that kind of unity, they say.

Except, of course, the ‘wise and learned’ would like to be the ones who decide how we all come together. It wouldn’t occur to them that someone uneducated might be the one with the prophetic word we need. And they wouldn’t talk of salvation, only getting along. And getting along is fine, important even. But what if we all get along while killing the earth? What if the ‘we’ doesn’t include everyone? Or maybe ‘we’ aren’t the center of everything?

I’m not really clear about the answer to those questions, as I contemplate this shredded nursery that was blown to bits by a ‘rush of violent wind’ last September – Hurricane Irma. I, a mere mortal, am not able to engage this scripture as metaphor. I am caught up in a storm of contradictions: farming under organic certification to be as harmonious with the earth as possible while still making a living. We’re the ‘good’ farmers, and yet our list of sins is extensive: polluting the water table by massive over-fertilizing, cranking plastic bags into the Florida landfills because customers here expect that convenience, about 500 car trips to our stand on the edge of town per weekend, over-tillage which, in addition to using even more fossil fuels, destroys what would otherwise be a soil ecosystem. There are no earthworms in our soil, soil that is famous in Florida for its tilth and growing power.

We need salvation. And I don’t just mean the farm I work at, though we perhaps feel it most palpably. Florida is one of the places most like the Jerusalem of Pentecost. Back then, on the 50th day after the feast of unleavened bread – the faithful were gathered in a cacophony of celebration. Like us, they had an impending ‘end of the world.’ We have climate change. They had the destruction of Jerusalem, where, to their understanding, the divine was centered.

Did the impending end of the temple state – which half of them must have seen with the clarity that half of us see climate catastrophe coming – feel like the impending end of civilization?  I’m not predicting the end of civilization. But I’m wondering if that FELT like this FEELS. The feeling of needing good news, but needing it to come from somewhere other than where all the bad news keeps coming from.

The cacophony of Jerusalem (New York, L.A., strip-mauled Florida) goes on like normal and then – suddenly – something rises above the static. Even then, about half of the group scoffs, ‘aw, those people are ______’ (drunk, hippies, fanatics, liberal elites). The Pentecost story doesn’t say what happened to the scoffers. Surely, some wandered away, while others listened. The poor will always be with us, but so will those who resist the gospel. So Peter pressed on. In this cosmopolitan swarm, it was a hick who brought the word that gave life, offered salvation.

Where are the hicks’ voices about this need for salvation? The voices that sound of having worked with the land or sea for most of one’s life before having something to say about the earth? I’m waiting, and I think we all are.

We wait for the prophetic voice, spoken from one without a career to protect.

I don’t know who it will be, and I don’t know what their message will be. But I have a clue. Rather than abstract away from scripture, we will be invited to look more concretely into it. Pentecost, meaning “fiftieth,” happened during the festival of weeks, a celebration of the Sabbath code. That code called for, among other things, a regular day of rest, hospitality to the stranger, and the reinstatement of those who have been disenfranchised in the many ways society marginalizes people. These pieces of wisdom were in about as much disuse the day Peter addressed that cosmopolitan group as they are in our day. Both then and now, individuals were at a loss for how to go about things in a society that disregarded the wisdom of scripture. What good is it to tithe to a corrupt temple state? What good is it to do truly sustainable practices if one would go out of business? Then and now, the economy (from Oikos, household) only makes sense to participate in to the extent that it incorporates justice. The justice is the roof that protects all underneath. As is, the justice in our economy is about as intact as the plastic on our greenhouse. And yet, that fisherman was able to find in scripture the words to offer salvation. God’s house was about to be taken down, and he offered them an indestructible home.

So where do we make our home? In other words, how can we be saved within this insecure Oikos – this household that is falling apart? I can’t say. I have to get this done so I can go fix the greenhouse in the ‘spare time’ outside of tilling and selling. But I have confidence – no, faith – that God will once again speak through those we least expect to hear God. People who are on the outside, because they are always outside. Not a well-planned, scheduled trip outside, but outside as a matter of course. Outside because they are of nature, and that’s where nature is. Outside physically, and outside the mainstream economy. It will be a household offered to everyone, but a narrow path that leads to it. The household will be small by the measures of empire – like a ‘magnificent shrub’ for little birds like us. And those calling us to it just may have a twang in their voice. They will be the modern-day Galileans; like Peter, like Jesus. They may be inviting us to a salvation that is outside of our institutions – maybe literally outside of our buildings – and into God’s household.

Andrew Hudson is a recent empty-nester and until recently interim pastor of a small Mennonite church in Sarasota, Florida. He is throwing himself into organic farming and being a singer-songwriter. He, and his former congregation, live in the Phillipi Creek watershed, which was a small part of the territory of a group of Amerindians now called the Calusa. On contact with Europeans, the Calusa were wiped out so quickly by disease that they are only known through archaeology.