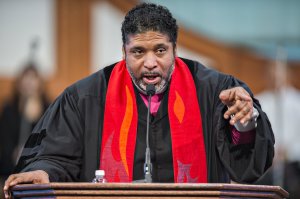 From William Barber’s recent comments in a Democracy Now interview:

Before all of the latest news, Judge Kavanaugh, first of all, was being put forward after McConnell in the Senate held open a seat for over 420 days, in a way that we had not seen since the Civil War. They literally denied a president his right to nominate someone and for them to have a hearing. This was the same Judiciary Committee that denied two African-American women a hearing to be appointed to the federal court, the 1st District—Eastern District in North Carolina. So the process was bad from the beginning.

Now that this has come out—and I’ve been thinking about it in a number of ways. Number one, this lady did not intend to come out. Dr. Ford, she—it was leaked. And she has asked for a FBI investigation. That’s strange for someone that the extremists, who call them Republicans, are trying to say she’s lying. But be it as it may, it’s all alleged. I heard Michael Moore mention a minute ago about the feminist side of this, the woman’s side of this agenda. Let me flip this over. Imagine Obama nominating a black or a Latino man for the Supreme Court, and an accusation comes up that that black or Latino man had attempted to rape a teenage girl. Imagine that for a minute, and imagine what the Republicans would be doing if in fact that was the scene that we’re dealing with now. Here they are having a white man for the Supreme Court nominee accused of raping—attempting to rape a white woman, and they are already forming an opinion and wanting to refuse to even give her an FBI investigation. This is nothing but the gangsterization of our politics and our political systems, and people in America must stand up against this entire process, because it is a direct—it’s contrary to our fundamental values.

2 thoughts on “The Gangsterization of Our Politics”