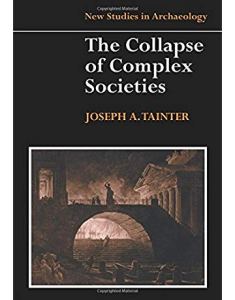 A review of The Collapse of Complex Societies , Joseph A Tainter (Cambridge University Press, 1988).

So I’ve been abed for several weeks, and therefore able to reflect upon the bigger picture. I’ve just finished a book that has long been on my reading list. It’s a fascinating, thought provoking work by anthropologist-historian Joseph Tainter, who ponders the meaning of collapse in reference to complex societies. The qualifier is important.

Complex societies are a recent and unusual aspect of human history. The normal societal condition for the majority of human history is relatively simple, localized, and stable (see James C Scott’s work on peasant economies for support of this thesis). The collapse of a complex (e.g. industrialized, bureaucratic, extractive) society is when it involuntarily begins to shrink. It can no longer do what a complex society can do because it cannot support or sustain its complexities.

Obviously, this a topic that many of us have been considering for a long time. Whether as a symptom of nuclear proliferation, unrelenting militarism, resource depletion, or ecological extinction, we often wake in the middle of the night pondering collapse.

Examining the major Roman, Mayan, and Chacoan collapses Tainter also references many more. His template is economic. A complex society makes an investment of energy and resources into a particular way of being. They seek the highest per capita return upon their investment. What precipitates collapse on his model is a decline in marginal returns. Collapse (in Tainter’s economic model) becomes a necessary though involuntary reduction of complexity for the sake of survival. A study of history shows that complex societies do not necessarily collapse, but are made vulnerable to collapse. It becomes more and more difficult (increasingly burdensome) to maximize returns upon our investments. He’s not talking stock market finance here, but extraction of human and natural resources, management of larger and larger populations, and creating and sustaining more and more complex relationships and systems to guarantee the flow of goods and services, repress dissent, extend territories, and perpetuate prosperity.

To be clear, Tainter is not proposing an economistic explanation that is bloodless and blind to suffering and injustice. But he believes of all the competing theories seeking to explain collapse (he examines several from Augustine, Gibbon, Spengler, Toynbee, et al) his theory is uniquely able to accommodate aspects of them all.

Finally, Tainter notes that declining marginal returns are facing contemporary complex societies in several areas: agricultural, mining and energy, research and development, health, education, management, new GNP growth, and technical design. He is not arguing any one particular scenario for our global future. But both optimists and pessimists are prone to ignoring the lessons of history.

The challenge facing us today is a world full of complex societies on a planet with diminishing limits. I was reminded of St. Augustine’s observation about the Roman Empire being large and impressive, but as fragile as glass. (City of God, chapter 3). Tainter’s thesis poses some interesting questions for the history of Christianity as a whole.

The Bible is full of collapse theories, from Adam and Eve eating the forbidden fruit, Noah’s perverse and wicked generation, Nineveh’s disavowal of the poor, the prophet ‘s declaration about idolatry and injustice, or Jesus proclaiming Jerusalem’s immanent fall because they did not know the ways of peace.

The historic Christian Church has invested a substantial amount of prosperity, population, and propaganda in supporting the increase in civilizational complexity. This goal has been used to justify warfare, conquest, oppression, enslavement, and even genocide. As well as provide for economic redistribution, expanded health care, education, and advocacy. The devil’s bargain we might say.

Clearly, even those of us critical of this history are complicit with the resulting complexity of our contemporary world. We fly to distant locations, utilize integrated financial systems, vote for officials who might manage our complexity more justly, and create a world full of complex non-profts doing complex (but necessary) things all around this complex world. The maintenance of and correction for our complexity takes up a large part of daily lives.

Tainter has no answer as to where this civilizational project is taking us. Any simple answer belies its complexity. But his observations deserve consideration. When we fill his theories with flesh and blood we see not just the economizing aspects of collapse, but the enormous suffering. Complex societies always both relieve suffering and increase it. Their collapses do the same.

The question for followers of Jesus is perhaps not whether, but who. If complexity is a central characteristic of our contemporary lives, opting out is not a realistic or compassionate alternative. And if collapse is an emerging and cascading probability for so many is our world, do we stand with the oppressor or the victims? What does the crucified Jesus teach us in such a world?

A simple spirituality cannot accommodate the collapse of our complex world.