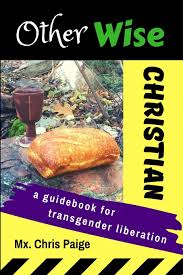 Reading the Bible while transgender involves sorting through many distortions and biased assumptions that have been passed along, both through tradion and translation. Often critics are so confident in their bias that they aren’t even looking at the text. My book, OtherWise Christian: A Guidebook for Transgender Liberation, has only been out for a few months, so I am only beginning to encounter trolls, but I have already seen “conversations” devolve into “because I said so” non-arguments. Looking past the strident (and often ignorant) opposition is the first barrier to reading the Bible as a transgender-affirming ally.

“Eunuch” (saris in Hebrew or eunuchos in Greek) is mentioned 50 times in the Christian Bible, but has frequently been written off as “servant” or “court official” despite a long established, cross-generational and cross-cultural history of “eunuch” functioning as an alternate gender. Dr Sean Burke writes that he has looked and found no actual evidence for the argument that a eunuch could be a role without physical/gendered connotations. I rather assume that this rumor about eunuch not meaning “eunuch” emerged in order to make non-transgender people more comfortable. However, the discomfort of our allies is not a good reason to contort the text. Confronting rumors, bad scholarship, and assumptions is key to reading the Bible as a transgender-affirming ally.

Trans-antagonistic Christians like to pretend that gender diversity is a modern development, but the early Christian communities were seriously debating about how literally they should take Jesus when he speaks of three kinds of eunuchs in Matthew 19:12. In fact, a prominent church father, Origen, castrated himself to (literally) become a eunuch for the kingdom—though he was later condemned as a heretic as the early Christian resistance communities were transformed into the state religion of Christendom. In short, Megan DeFranza and others argue that the “two and only two opposite genders” ideology is a relatively recent development, and one that aligns with the evolutions of empire through the centuries. Taking gender diversity in the ancient world seriously is a critical component of reading the Bible as a transgender-affirming ally.

Trans-antagonistic trolls (Christian or not) admonish transgender people to read Deuteronomy literally (even more literally than many people who actually shape their lived around Jewish law). Yet, the affirming words about eunuchs that are attributed to Jesus himself are usually dismissed as being taken out of context, irrelevant, or “mysterious.” Some translations (e.g. Contemporary English Version, Good News Translation) go so far as to render “eunuch” as “unable to marry” in Matthew 19:12, removing any semblance of the ancient context around the gender role of the eunuch. How deep is the colonization of Christian tradition that the red-letter words of Jesus have been domesticated in this way? Why the double standard? Since when is Deuteronomy more important to Christians than the words of Jesus? Why not take Jesus literally, too? Being suspicious of trans-antagonistic interpretations is necessary and productive as as part of reading the Bible as a transgender-affirming ally.

Transgender readings of the biblical text are often accused of eisgesis, that is, reading transgender experience into the text when it is not originally there. Joy Ladin, author of The Soul of the Stranger: Reading God and Torah from a Transgender Perspective, teaches about what Jewish tradition calls pshat, or a plain reading of the text. This is an interpretive discipline that emphasizes a close reading of the text without adding in extra assumptions. In many cases, transgender theologians have simply been offering an interpretation from pshat that strips away the transphobic assumptions non-trangender people have been imposing upon the text for much too long. You may not agree with every conclusion we make. You may have other explanations that also work. But there is certainly ample evidence that gender diversity was both a part of the ancient world and a part of the Biblical text.

Another great example of how anti-trans bias slips into our interpretation is the way that commentators speak of Joseph’s beloved garment (ketonet passim in Hebrew, Genesis 37:3), Despite a common footnote(s) saying the “Hebrew is uncertain,” a ketonet passim is clearly described as a “princess dress” in 2 Samuel 13:18b. In other words, there is an extremely simple, entirely biblical reading of ketonet passim as “princess dress,” but the cognitive dissonance of most commentators renders it “uncertain.” Others make the leap to assume that, “apparently, it was a unisex garment,” despite the specificity of the 2 Samuel text. Reading the Bible as a transgender-affirming ally means recognizing that non-transgender people are just as capable of reading their own experience into the Bible as transgender people are. Just because your readings are more common does not make them more authoritative.

Joseph being sold to a prominent Egyptian eunuch is a further context clue supporting the idea that Joseph was an effeminate man, if not a literal eunuch. Yet, one respondent disputed my assertion that Potiphar was a eunuch with great confidence, because “eunuchs did not marry.” Simply put, the biblical text calls Potiphar a eunuch, not once but twice (Genesis 37:36 and 39:1). A married eunuch does seem curious and we might come to different conclusions about what this might imply, but the biblical text is clear. Reading the Bible as a transgender-affirming ally means being willing to dig deeper and question our assumptions when the unexpected comes.

My reading of Rebecca questioning her pregnancy as a possible symptom of gender dysphoria was probably the biggest surprise I had while writing OtherWise Christian. Others have argued that Rebecca was a masculine woman, a tomboy, or at least unusually strong and assertive for a woman, so Rebecca’s almost suicidal declaration, “Why do I live?” (the Hebrew is legitimately unclear and is translated in a variety of ways) really landed with me. Yes, I am bringing modern-day language about gender dysphoria to the text, but that does not mean that I am wrong to notice that there is something remarkably gender non-conforming about Rebecca’s behavior, while offering my own experience as a lens through which to read it. There is nothing in the text that suggests that Rebecca wanted to be pregnant or celebrated the experience of being pregnant. The idea that an infertile woman in that day would have been delighted to get pregnant is just another gendered assumption that we bring to the text. Reading the Bible as a transgender-affirming ally means considering that transgender experience and perspectives are just as valid as non-transgender experience—and celebrating when new options emerge.

In short, we have all been thoroughly schooled in actively ignoring (or reinterpreting) evidence of gender diversity—both in the Bible and in the world around us. When critics say that Jesus or Joseph or Rebecca could not have been gender non-conforming, it is harmful and arrogant. It is just as harmful and arrogant as arguing that transgender people “don’t exist” today, just because you don’t understand our lived experience.

Transgender people and interpretations may challenge your colonized expectations in both life and sacred text, but that does not necessarily mean that we are sick, sinful, or even wrong. Our experiences have been ignored, discounted, or discredited for far too long. To quote Jesus, “Very truly I tell you, we speak of what we know, and we testify to what we have seen, but still you people do not accept our testimony.” (John 3:11 NIV)

Like Jesus to Nicodemus, we offer you an invitation to begin again. “Let anyone accept this who can” (Matthew 19:12b).

Mx Chris Paige is an OtherWise-identified writer, educator, organizer, and coach, who authored OtherWise Christian: A Guidebook for Transgender Liberation (released July 2019) and has a new introductory resource called Christian Faith and Gender Identity: An OtherWise Reflection Guidedue out in November 2019. You can also join in with OtherWise Self-Defense office hours on Wednesday nights at 8pm Eastern. Find out more at otherwisechristian.com.

Chris was founding executive director of Transfaith, a multi-tradition, multi-racial, multi-gender advocacy organization by and for people of transgender experience, as well as published of the (now defunct) award-winning The Other Side magazine. They have recently launched OtherWise Engaged Publishing, where they provide a platform for prophetic, transgender, intersex, and OtherWise voices.

You can learn more from Chris Paige at

Hosted by The Alternative Seminary, Transfaith, and Germantown Mennonite Church

2 thoughts on “Reading the Bible as a Trans-Affirming Ally”