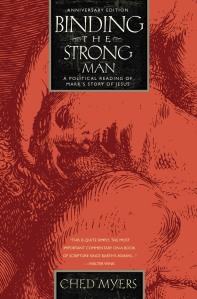 We continue our celebration of the 30th anniversary of Binding The Strong Man, Ched Myers’ political reading of Mark’s Gospel.  Today’s passage is Mark 6:1-13.

There is no indication that Jesus’ “orders” are unique to this mission; they are for “the way” (eis hodon)–that is, paradigmatic of discipleship lifestyle (6:8).  Their narrative significance lies not in some model of heroic asceticism (which would contradict Jesus’ ambivalence toward, e.g., fasting), but in the emphasis upon the utter dependence of the disciples upon hospitality.  The “apostles” (so designated for the only time in Mark upon their return from the mission in 6:30) are allowed the means of travel (staff, sandals) but not sustenance (bread, money bag and money, extra clothes).  In other words, they, like Jesus who has just been renounced in his own “home,” are to take on the status of a sojourner in the land.  We might note that the “donning of sandals” as a Markan metaphor for discipleship was missed by both Matthew (who forbids them, Mt 10:10) and Luke (who omits the reference, Lk 9:3).

…The symbolic gesture of shaking dust from the feet connotes “a witness against” these places, Mark’s technical phrase for describing those whom the movement perceives as opponents.  The vocation of hospitality is taken with deadly earnest by Mark; households that refuse it are thereafter shunned.

It could certainly be conjectured that these instructions reflect an actual social strategy by which the early movement procured a network of “safehouses” around the countryside for purposes of mission and travel.  Whatever the de facto missionary practice may have been, it is interesting to reflect upon the similarities and differences between the marching orders for this nonviolent campaign and the traditional strategies of other subversive movements.  Like modern guerillas, for example, Jesus’ disciples are subject to the social and political perceptions of the local populace, which will determine whether or not they will be “received”–always a good test of one’s “popular base.” Unlike guerillas, however, who must “eat and run,” the Christian missionaries make no effort to be covert; where they are offered accommodation, they stay and establish a profile.  And whereas a military-based movement will usually seize by force what is needed, at least in situations of acute need, Jesus forbids retaliation in the event of rejection.  This makes the missionaries completely vulnerable to, and dependent upon, the hospitality extended to them, and obviously precludes them from being able to impose their views by force.