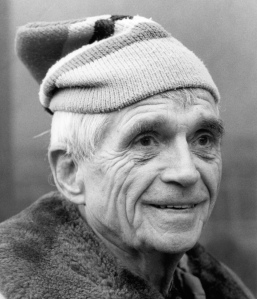 Four years later when the Berrigan brothers with seven others entered the draft board in Catonsville, MD, removed the 1A files (of those eligible for sending to the Vietnam War) and burned them with homemade napalm, those ashes too would eventually anoint my life and pastoral calling. Daniel turned that action toward liturgy, toward poetry. He edited the transcript of their conviction in Federal Court into a play of international repute, refused induction into the prison system, and went notoriously underground for four months writing and speaking from the “most wanted list,” before being captured by the FBI at the Block Island home of his friend William Stringfellow. When he was released after two years in the Federal system, Berrigan came to New York City and taught a course on the Apocalypse of St. John when I was a student at Union Seminary. Full disclosure: Dan Berrigan became to me not merely teacher, but mentor and friend.

In the year following Dan’s death at 95 (+April 30, 2016+), Jim Forrest undertook the heroic literary effort of writing At Play in the Lion’s Den: A Biography and Spiritual Memoir of Daniel Berrigan (Orbis, 2017). Perhaps he had a running start. Three things are notable about the book up front. One is that Forrest’s own life and callings are inextricably tangled with Berrigan’s. (He was, for example, editor of the Catholic Worker, when Dan first appeared there, was himself part of the Merton retreat, hatched with Dan and staffed the Catholic Peace Fellowship, and responded to Catonsville with his own participation in a draft board raid joining others in Milwaukee within the year). So, like the Acts of the Apostles, there are whole sections written in the first person voice. Other places he peeks from behind the elegant narrative to lend a knowing detail or simply cites the voices of others with a certainty of having been there too. For a biographer, this is a vested and risky wire act. Don’t fall into self-aggrandizement (his genuine modesty saves him that) or the net of personal hagiography. And best to confess up front by title: “Biography and Spiritual Memoir,” a difficult art he has mastered.

Another note is that he solicited a circle of collaborators to tell their own testimonies, answer questions, comment, and correct the occasional misplaced assumption. In that sense the book is a veritable act of community. Not so much collectively written as collectively underwritten. OK, fuller disclosure: I was among those solicited, contributing ever so slightly to the story.

A third concerns photographs. Forest once published a pictorial life of Thomas Merton. When he expanded and republished his biography of Dorothy Day, he filled the book with photos. The present volume shares with each a common editor and publisher, Robert Ellsberg of Orbis Books, and a similar commitment to the visual. Every chapter of text is illuminated with a host of photos. Posters, banner holds, caricatured birthday invites, the Time Magazine cover of Dan and Phil dragging the church into nonviolence by the collar, towering puppets for an underground escape, whole walls of art and loved ones, courtroom sketches, and the inevitable book covers from lauded poetry, to resistance shelf, and finally the biblical commentaries mining Jesus and the prophets. There are photographs of compatriots and conversation partners, Dorothy Day, Merton, Thich Nhat Hahn, Howard Zinn, Ernesto Cardenal, Stringfellow, Eqbal Ahmad, Elizabeth McAlister, Muste and King, never mind beginning to end – Philip, Philip, Philip. But above all himself, in Frida’s arms or beneath Dado’s scowl, pious and well-scrubbed, pensive, mugshot, chastened or chagrinned, exuberant, mid-utterance, the mike or camera in his face, free in the cuffs, the dock, the cell, laughing aloud or just about to. Always it seems there is love in his eye, and somehow free delight.

Like Gandhi’s “experiments in truth,” Forest tracks moments in Berrigan’s conversion to the gospel of nonviolence. To be sure he was raised in a home where the Catholic Worker was present, but he didn’t seem to be reading it during WWII where in the isolation of seminary, he blessed our soldiers, Philip among them, in their cause for Christ. Post-war, he did create a small dust up reading God and the Atom and sharing it with his first high school charges. A year in France (he came to love the place) moved him forward with exposure to both the “worker priest” movement and the front -page reports of Dien Bien Phu – the collapse of the French war in Vietnam. Back in the states he met Dorothy Day and began a decisive life-long relationship to her Catholic Worker movement. Knew it or not, his conversion was met in earnest. Add Phil’s early experience with racial justice work and conversation with Christians of Eastern Europe, by the time of the Merton retreat he was in deep formation.

Prelude to Catonsville was the anti-war self-immolation of the young Catholic Worker, Roger LaPorte. (See Dan’s discussion of that with Thich Nhat Hahn in The Raft is Not the Shore). Forest reproduces portions of his memorial homily for the community which actually triggered his ecclesial exile to Latin America, yet another station on the way. In 1968, more immediate prelude was his night fight to Hanoi with Howard Zinn to retrieve American POW’s. There, in a shelter, he tasted life beneath U.S. bombing. Between that and the draft board action was the assassination of Martin King. Find the cost of freedom. God loves a moving target and Berrigan’s conversion to gospel nonviolence ran effectively life-long. The big events, like Catonsville or the 1980 General Electric action (hammering swords/nuclear delivery vehicles into Plowshares) are the ones where the struggle of discernment within the movement is a refiner’s fire. Was destruction of property non-violent? In the first, though they eventually affirmed, Dorothy and Merton would have held him back. Phil pulled forward.

In between and thereafter the elements of conversion were perpetual: the network of safehouses built in his underground sojourn; the ragtag study communities gathered in prison; suffering the heatstorm from Israel for his biting critique on behalf Palestinians; pressing nonviolence with the Weather Underground domestically, and with Ernesto Cardinal in Central America; the endless Pentagon actions – blood and ashes – with Jonah House folk.

My own conversion to gospel nonviolence came at Daniel’s hand. Or at his word. Call it the witness of his life. And it precipitated a genuine crisis in me. He served in that period as something of a spiritual director to me and offered cold comfort: “You’re getting born and it’s bloody. It’s always bloody.” Don’t have to wonder how he knew that. He is so often called prophet or poet or priest, and rightly, but too rarely “apostle or evangelist” of nonviolence. I venture to say that his is a life, even again in the telling, which calls so many of us to radical discipleship. Deo Gratias.

3 thoughts on “An Unbound Spirit”